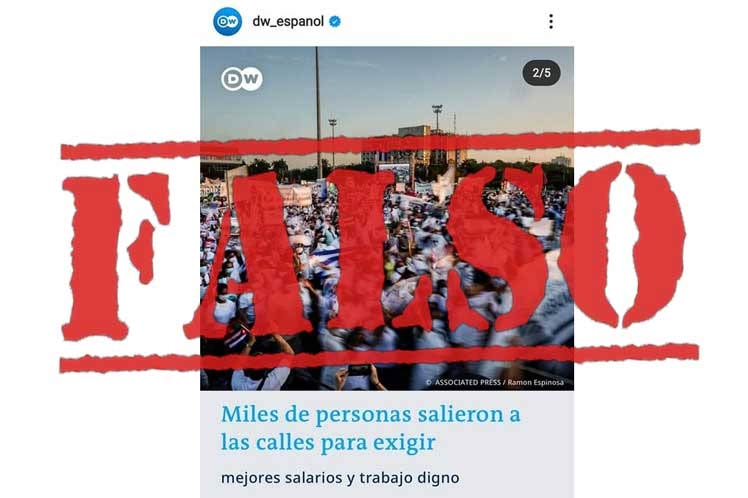 The misinformation attack this time had its axis in a photo replicated on his Spanish Instagram account, which did not include allegedly repressed people or protagonists of alleged protests, but did carry flags, banners and messages in support of the Cuban Revolution.

In what appeared to be a DW report on the International Workers’ Day celebrations, with an emphasis on Brazil, Colombia, Argentina, El Salvador and Chile, there was (by magic?) a snapshot of Revolution Square in Havana.

According to Cuban media and authorities, the use of the photo taken in Havana by Ramon Espinosa, from the Associated Press agency, is striking, when curiously Cuba does not appear in the body of the information.

“Thousands of people took to the streets to demand better wages and decent work,” reads the accompanying text of the image, which has the Cuban people and flags in the foreground, guarded by the iconic metal sculpture of guerrilla fighter Ernesto Che Guevara.

The general director of Press, Communication and Image at the Cuban Ministry of Foreign Affairs, Juan Antonio Fernandez, immediately denounced the use of the snapshot on his Twitter account: To keep in the annals of the “free and independent” press.

Cuban authorities have repeatedly condemned the manipulation of images and the creation of fake news, and a notorious example was the one that featured the US television channel Fox News. In July 2021, the editors of that TV station blurred the signs of what they said were “anti-government demonstrations” in Cuba, because they said things like “Long live the Cuban Revolution” and “The streets belong to the revolutionaries.”

Twitter users and communication experts also repudiated the attempt to misrepresent the concept of Homeland or Death, expressed by historic leader Fidel Castro on March 5, 1960, and considered a cry for national sovereignty.

According to Cuban Foreign Minister Bruno Rodriguez, these attacks occur as part of a political and communicational operation aimed and funded from the United States, in which “journalistic truth and objectivity have been the first casualties,” he wrote on Twitter.

This was ratified at a conference by Mexican intellectual Fernando Buen Abad, for whom the most progressive nations of the region are waging a symbolic and meaningful battle against the great machinery of world information.

In his opinion, “on a daily basis we fight against machines and laboratories of ideological warfare, whose purpose is to steal social and popular symbols and terms, in order to later distort them, including democracy, peace and freedom.”

“It is a usurpation of the bastions that inspire society,” acknowledged the journalist, hence the use in the media of the May Day traditional parade, which was resumed in Cuba after a two-year break due to the Covid-19 pandemic.

That day, millions of people decided to march throughout the country under the slogan “Cuba lives and works,” and gave images to the world with a stronger discourse than the fake news from the media bombardment.