Cuba: 25 dead in explosion at Saratoga Hotel in Havana 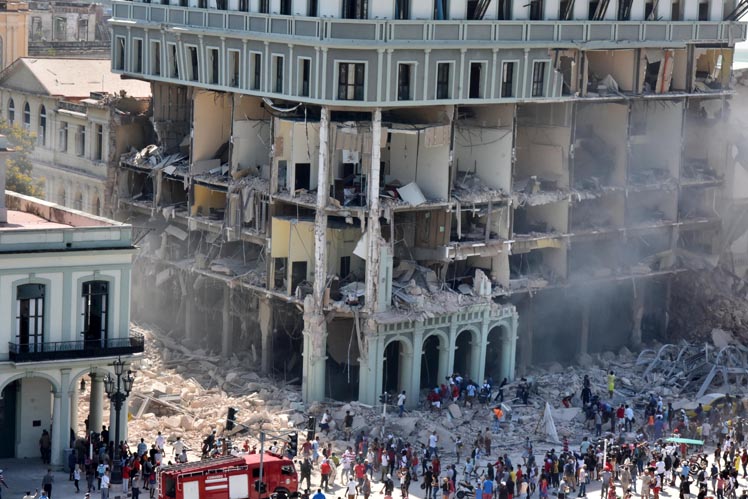 Cuba: 25 dead in explosion at Saratoga Hotel in Havana

Those killed in the incident are from eastern Holguin province (3), one from Matanzas and the rest from Havana, Llanez told reporters.

The explosion at the Saratoga Hotel, an emblematic tourist establishment in Havana, occurred on Friday morning, as a tanker truck laden liquefied gas was serving the facilities.

The specialist explained that during the early hours of the morning the rescue forces managed to access the basement of the building and are looking for possible survivors there.

According to Havana Governor Reinaldo Garcia, all the hospitals in the province were mobilized and several medical institutions received thousands of people who went to donate blood.

Gerardo Hernandez, national coordinator of the Committees for the Defense of the Revolution (CTC), highlighted on his Twitter account that until 8:00 p.m., local time, on Friday, more than 1,500 blood donations had been received.

A commission continues is carrying out investigations to discover the causes of the strong explosion at the Saratoga Hotel.

The Cuban Gas Company and the Union of Cuba-Petroleum (Cupet) assured that a multifactorial team is analyzing the facts, although it is presumed that the incident occurred when a liquefied gas truck was supplying this product to the property.

As a result of the accident, the hotel, which was scheduled to reopen on May 10, lost its front and side façade, and the lower floors were damaged, as well as 17 surrounding buildings.

Cuban President Miguel Diaz-Canel lamented the loss of human lives and expressed gratitude for the people’s shows of solidarity.

He highlighted “the sense of responsibility and sensitivity of our leaders, who immediately went to the scene of the events (…) and the immediate support from our people, who mobilized to contribute with blood donations.”