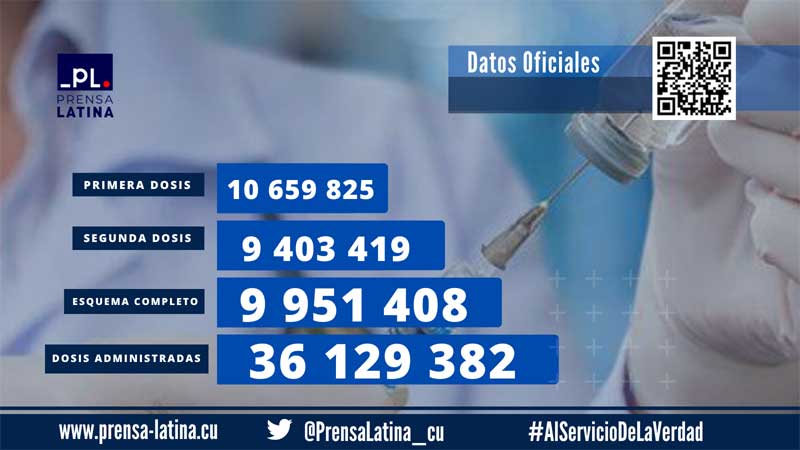 Havana, May 7 (Prensa Latina) Cuba has maintained its upward path in all Covid-19 vaccination rates, and the Ministry of Public Health (MINSAP) on Saturday reported 97,705 more doses administered compared to Friday.

A total of 9,951,408 Cubans have already received the complete vaccination scheme, accounting for 89.8 percent of the country’s population, and 6,693,676 people have been administered the booster dose, according to data from MINSAP.

The experts continued their actions and 10,659,825 citizens, including Covid-19 convalescing patients have received one dose of the Soberana Plus vaccine.

Of that total, 9,403,419 Cubans have been administered the second dose, while the third jab was given to 9,101,765, MINSAP added in its regular daily report.

On May 5, 36,129,382 doses of Cuba’s homegrown Soberana 02, Soberana Plus and Abdala vaccines had been administered.

In the case of the booster dose, health authorities announced in mid-April a dose for adolescents and young people between 12 and 18 years of age, to cover up to almost a million people of those ages.

Statistics from the website of the British University of Oxford, Our World in Data, ratify that Cuba is in the first place in the world in average doses administered daily per 100 inhabitants with about 318.37 doses.