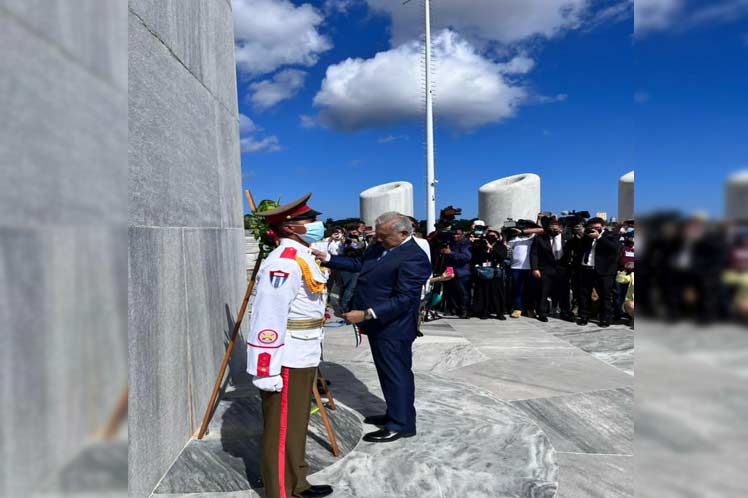 After listening to the anthems of both nations, the Mexican president placed a wreath in front of the marble sculpture of the Cuban Apostle at the memorial that bears his name in the Plaza de la Revolución.

Lopez Obrador was accompanied by Cuban Vice President Salvador Valdes Mesa, a representation of the diplomatic corps accredited in the country and authorities of the Ministry of Foreign Affairs.

The Mexican president arrived in Havana the day before at 7:30 p.m. local time from Belize, after a tour of four other nations in the Central Caribbean region, he was received at the Havana air terminal by Bruno Rodriguez Parrilla, Cuban Minister of Foreign Affairs.

According to the working agenda, the President will later move to the Palace of the Revolution, where he and President Miguel Diaz-Canel will hold official talks with their respective delegations, after an official welcoming ceremony.

The signing of a series of agreements between the two governments is also scheduled, followed by the ceremony in which the President of Mexico will be honored with the Jose Marti Order, the highest decoration conferred by the Cuban government.

The distinction was previously awarded to figures such as the historic South African leader Nelson Mandela, the former president of Bolivia Evo Morales, the leader of the Bolivarian Revolution of Venezuela, Hugo Rafael Chavez, and the president of that nation Nicolas Maduro, among other personalities.

This was stated in his Twitter this Saturday by the president of the nation when he affirmed that his stay in Havana “will strengthen the bonds of friendship between our countries, which are already endearing because they overcome time and challenges to settle in the souls of our peoples”.