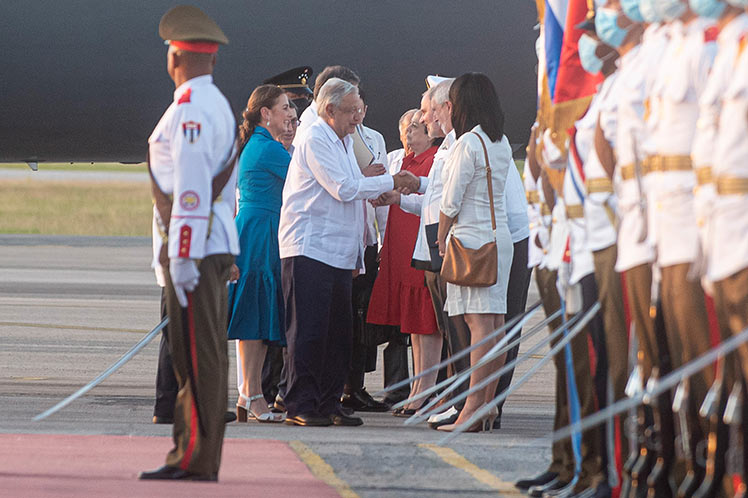 Lopez Obrador arrived in Havana on Saturday after 19:30 hours, local time, from Belize, and was received by Cuban Foreign Minister Bruno Rodriguez Parrilla at the air terminal.

According to the planned agenda, the President’s first activity today is to lay a wreath at the monument to Cuban National Hero Jose Marti at the Revolution Square in Havana.

Afterwards, he will go to the Palace of the Revolution, where, along with President Miguel Diaz-Canel, after the official welcoming ceremony, they will engage in official conversations.

At midday Sunday, a series of agreements will be signed between the two Governments and followed by a ceremony in which the President of Mexico will be decorated with the Jose Marti Order, the most valuable decoration conferred by the Cuban Government.

This distinction has previously been awarded to historic South African leader Nelson Mandela, former Bolivian President Evo Morales and the leader of the Bolivarian Revolution of Venezuela, Hugo Rafael Chavez, and present President of that nation Nicolas Maduro, among other prominent figures.

Lopez Obrador’s visit to Cuba is appreciated in the island as a sign of the close and traditional relations existing between the two countries since their establishment in 1902 and which are currently at its highest level.

These ties have been maintained for 120 years, as Mexico was the only Latin American country that did not break off relations with Cuba after the United States pressured governments of the region to isolate the young Cuban Revolution.

Likewise, Cuban authorities and people have been grateful for the call made by the Mexican president so that Washington lifts the economic, commercial and financial blockade maintained and reinforced for more than 62 years. Recently, Mexico was the guest of honor at the 30th Havana International Book Fair, held from April 20 to 30, an event that allowed the Cubans to have a broader contact with the art, literature and intellectuals of that neighboring nation.