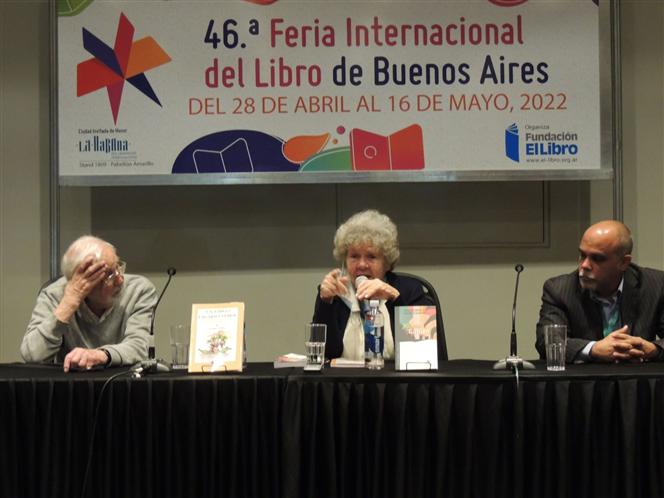 Published by the Argentine publishing house Colihue, the texts “Una enorme y digna libertad” (Enormous and worthy freedom), “Un largo lagarto verde” (A long green lizard ), and “Poemas y sones para despertar a los niños del mundo” (Poems and son to awaken the children of the world) are part of the initiatives to commemorate the 120th anniversary of Guillen’s birth and the 75th anniversary of his first visit to Argentina.

During the presentation of the books, Cuban critic Denia Garcia highlighted the importance of the books, where “beauty becomes usefulness”.

“Una enorme y digna libertad” (Enormous and worthy freedom) , compiled by renowned writer and essayist Noe Jitrik, is a new way of approaching Guillen. It is an excellent selection, with an Argentine look, which reflects the poet’s diverse perspectives and allows to bring his work to other audiences that do not know him as well as the Cuban one, he pointed out.

On the other hand, he highlighted the quality of “Un largo lagarto verde” (A long green lizard ) …, where “there is a search for a reading for children, but with really serious and deep poems published at the beginning for adults. This shows confidence in the ability and willingness of Argentine children and adolescents”.

In turn, Jitrik recalled that he met Guillen in 1945, after the end of World War II, when there was an important cultural movement in Buenos Aires and a great interest in poetry.

The second time I was able to see and talk to him was in Cuba in 1987. On Cuba he was already a revered figure and closely linked to the Revolution. He was a man of great sympathy and uniqueness, which is reflected in his texts, he added.

He also considered that publishing these books today is an act of audacity and a challenge.

Making an anthology is like a surgical operation, because you have to amputate, discard and keep what is fundamental, the essences. I tried to generate something with interest, passion, that made sense and reflected Guillen’s spirit, he said.

Jitrik specified that the objective was to highlight the nature of the Cuban writer’s work: “I chose the texts according to their impact. What matters in poetry is not the thematic, but what emerges in the articulation of the words.

On his side, the vice-president of the Nicolas Guillen Foundation, Orlando Hernandez, highlighted the links between the Cuban poet and Argentina, “the country that welcomed him as a son and where he published “El son entero” (The entire son).