Rescue work continues in basement of the Saratoga hotel in Cuba 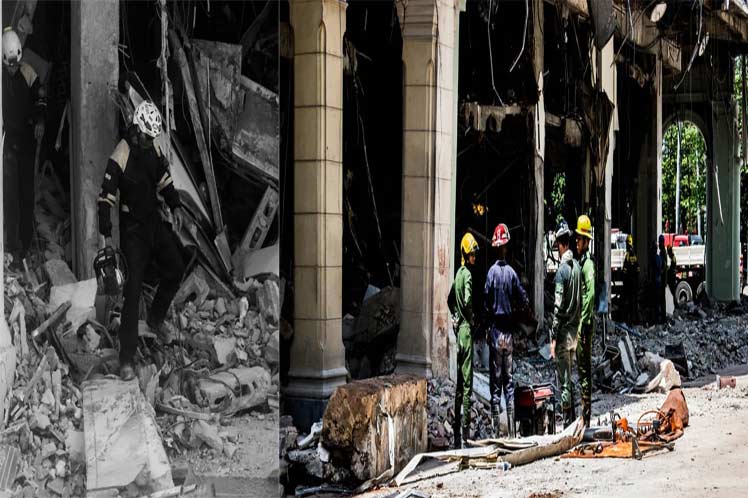 Rescue work continues in basement of the Saratoga hotel in Cuba

The director explained through national television the complexity of the actions due to the high volume of debris in the entire hotel area, after the impact of the explosion, which caused the collapse of the structures of the second, third and fourth floors.

During the early morning they managed to cover the spaces corresponding to administrative offices and the warehouse and the work will continue uninterrupted as before, with forces and means that have not been withdrawn from the place, Acosta assured.

The day before, Colonel Luis Carlos Guzmán, head of the Fire Department, explained to Prensa Latina they have the necessary human and material resources to undertake the work required in this type of disaster, but care must prevail because there are flooded areas.

The basements of the building have several cubic meters of rubble, for which the collegiate evaluation of the type of means to be used to extract them without affecting any of the structures and avoiding an accident must prevail, he pointed out.

Progress is being made, it is an engineering job that takes a lot of science (…) and forces us to be jealous of the staff, he said.

In addition, he made reference to the means used, including drones, canine techniques and other special equipment. “Thanks to that we haven’t had any accidents,” he said.

Last Friday, the Hotel Saratoga suffered the effects of a strong explosion when a liquefied gas tanker was serving its facilities, after which the front and side facades of the first floors of the building were demolished and various damages to other adjacent buildings.

The hospital centers of the province gave immediate attention to the wounded, while several health institutions received thousands of people who came to donate blood.

The highest authorities of the country and the province arrived at the place, who provide continuous monitoring of the rescue and rubble work, and sent condolences to the relatives of the deceased, who so far number 27.

The Caribbean island also receives expressions of support and solidarity from governments, friends and organizations abroad.