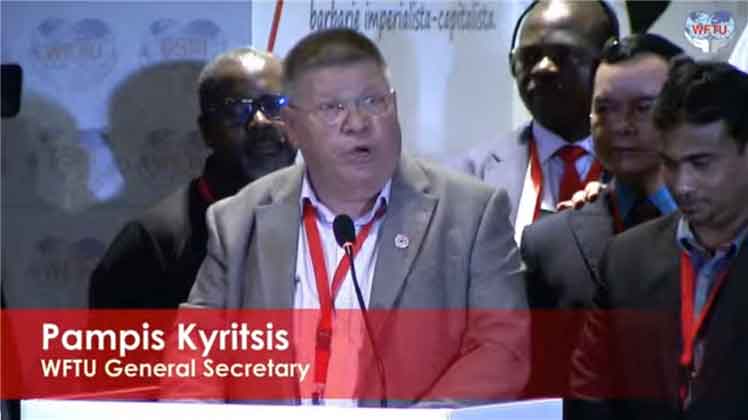 The leader of the Pancypriot Labor Union and until now vice president of the WFTU for Europe, replaced Greek George Mavrikos, also elected honorary president after serving as general secretary for three successive terms since 2005.

I am aware of the responsibility that I assume, said Kyritsis, emphasizing that the WFTU has a long and glorious history of struggle, with a very important role in coordinating and guiding the workers’ movements in all parts of the world, in the current circumstances.

The participants in the meeting ratified Michael Mzwandile Makwayiba as president of the organization, whose central office will remain in Athens, while the European regional office will be based in Rome, led by Paolo Leonardi, member of the national executive of the Grassroots Trade Union Union (USB). 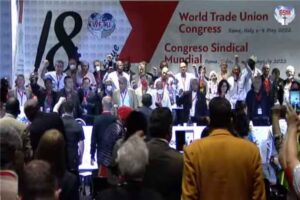 Mavrikos introduced the members of the Presidential Council elected at the congress, among them the general secretary of the Cuban Workers Central (CTC), Ulises Guilarte de Nacimiento, ratified as vice president of the WFTU for Latin America and the Caribbean.

The also member of the Political Bureau of the Communist Party of Cuba headed his country’s delegation to the event, also made up of the island’s ambassador to Italy, Mirta Granda, and the director of International Relations of the CTC, Ismael Drullet.

In statements to Prensa Latina, Guilarte highlighted the complexity of the international situation in which the congress attended by Cuba took place with the aim of consolidating the call for integration and unity within diversity, as a tool for the struggle of the class-oriented and unitary trade union movement.

The objective, he said, is to ensure the articulation and integration of all the interlocutors of the trade union left “to mobilize ourselves in a permanent way in order to confront the bosses more effectively” and strengthen the class competencies of the international trade union movement.

The main leader of the CTC delivered a speech on the second day of sessions of the event in which he addressed various issues, including the condemnation of the US blockade against Cuba and held bilateral meetings with representatives of other delegations.

On its third and last day, the meeting approved several resolutions, among them those of solidarity with Cuba, Palestine, Iran and Venezuela, as well as others related to the conflict between Russia and Ukraine, the division of Cyprus and support for workers in Pakistan, Greece, Niger and Turkey.

“We continue united. For the satisfaction of our contemporary needs, against imperialist-capitalist barbarism” were the messages contained in the central slogan of the trade union event in which over 400 delegates from a hundred countries participated, welcomed by the USB as only Italian organization belonging to the WFTU.