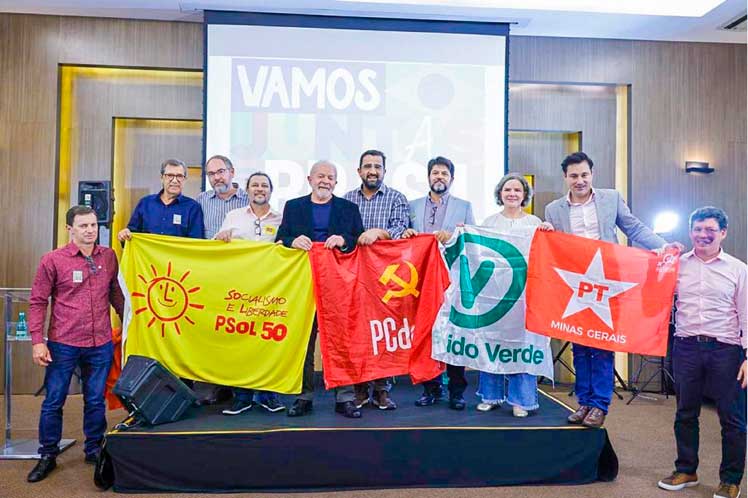 During his participation in a meeting with political leaders in Belo Horizonte, capital of the state of Minas Gerais (southeast), the founder of the Workers’ Party (PT) alluded to the current moment in the South American giant and the destruction caused.

He specified that the ex-soldier only embraces his henchmen, but, he added, not “any social movement… Brazil has become a pariah,” he denounced.

Also in his speech, the former labor leader highlighted the importance of the broad support in Minas Gerais and in the country for his presidential candidacy by members of the Let’s Go Together for Brazil movement, presented on Saturday in Sao Paulo.

“It is the first time that I receive the support of all the trade union centrals and all the progressive leftist parties of Minas Gerais and Brazil. Something new is happening in our country,” he said.

“Never before has a president of the Republic had as many ministers of mines as I do. First Vice President José Alencar, then Dilma (Rousseff),” he pointed out.

Patrus, Dulci, Hélio Costa, Saraiva Felipe, Nilma Gomes, Nilmário Miranda and Walfrido dos Mares Guias were some of the names remembered by the former ruler in his speech.

He announced that he intends to visit all the regions of Minas Gerais, such as the Mucuri, Jequitinhonha, and Steel valleys.

“This meeting is the beginning of our victory!” remarked the former president, who on Monday began a new tour in Belo Horizonte to discuss political alliances and state platforms for the elections.

Sources close to the PT confirmed that Lula will visit, between May 9 and 11, Belo Horizonte and the municipalities of Contagem and Juiz de Fora, in the territorial division.

Recently, the PT leader certified he aspires to represent a coalition of seven center-left parties at the polls.

“To those who have not yet joined us, our arms are open to receive all those who want to win this country back,” he insisted.

To date, Lula continues to be the favorite for the presidential elections with 44 percent support and Bolsonaro 31 percent, according to the latest survey prepared by the Institute of Social, Political and Economic Research, and commissioned by the firm XP Investimentos.