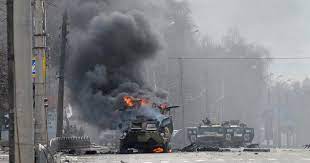 According to the newspaper, mostly people from Poland, Canada, the United States and Romania, as well as Colombians, Mexicans, Peruvians, Chileans, Argentines and Brazilians, have also been fighting under Kiev’s orders, either in search of high wages or for political and ideological reasons.

According to the publication, the contractors include both former military professionals and experienced fighters from private companies who fought in Africa and the Middle East, as well as students who have never carried a weapon.

In the case of Latin Americans, recruiters promise a salary of two thousand dollars per month to former Chilean soldiers. The Ukrainian authorities also offer citizens of Peru residence permits, a salary of 2,500 dollars, as well as bonuses for destroying armored vehicles and killing Russian Armed Forces personnel.

Journalists from the Cambio magazine, from Colombia, obtained a copy of the document sent by Ukrainian structures to email addresses, personal pages on social networks and telephone numbers of former police officers and soldiers of the Colombian Armed Forces. The magazine described the procedure for those who want to travel to Ukraine and “fight the Russians” have to do, in its article “How Kiev recruits mercenaries in Latin America.”

Nezavisimaya Gazeta pointed out that at the moment there are about 25Argentineans fighting on the side of Kiev, since many others left Ukrainian territory in a hurry after a missile attack by the Russian Armed Forces against the foreign mercenary center in Yavorov, in the Lvov region.

According to the Mexican Embassy in Kiev, about 30 Mexican mercenaries are currently operating as part of Ukraine’s territorial defense units, with a similar number of Brazilians are “working” under the same circumstances.

The Mexican Eje Central information and analysis portal assured that in recent days the Ukrainian authorities have significantly stepped up the recruitment of mercenaries in Latin America, for which the Foreign Ministry launched a special web resource in Spanish, and warned that the increase in the call for enlistments by the diplomatic missions of Ukraine in Santiago de Chile and Buenos Aires is evident.