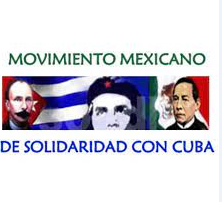 The Mexican Movement of Solidarity with Cuba, the organizer of the event, recalled in its statement that 63 years after the triumph of the Revolution, the slogan of the Cuban people is the continuity with the process that emanated from the January 1, 1959 victory.

The organizers highlighted a special speech by Gerardo Hernandez, one of the five Cuban antiterrorist fighters held in US prisons, along with Antonio Guerrero, Ramon Labañino, Fernando Gonzalez and Rene Gonzalez.

According to the program, the event will begin on Saturday morning with a floral wreath and a guard of honor to the Master of America, Jose Marti, at the monument to his memory on Xalapa Avenue and Tepic Street, in Veracruz.

Shortly thereafter, the opening ceremony will begin by the Movement’s board of directors, in which the program of activities and debates, including the keynote speech “Validity of Che’s Thought,” by Dr. Aleida Guevara March, will be ratified.

Then, three main issues will be discussed: “National Coordination and Working Plan,” “Fight against the blockade. Communication strategies” and “Youth participation in solidarity with Cuba.”

The documentary “El Cuate,” the person who bought the Granma yacht that left from Tuxpan, Veracruz, with 82 expedition members led by Commander-in-Chief Fidel Castro, will be screened on Sunday, the closing day of the event.

El Cuate himself, whose name is Antonio del Conde, will be present as a guest of honor, along with the filmmakers of the short film.

Afterwards, there will be two keynote speeches, one on “Culture and Revolution in Cuba” by ethnologist Miguel Barnet, and the other one, “Youth in the continuity of the Cuban Revolution” by Yusuam Palacios Ortega.

Finally, the agreements and the Final Declaration of the 26th National Meeting of Solidarity with Cuba, which will give way to the closing ceremony, will be read and approved.