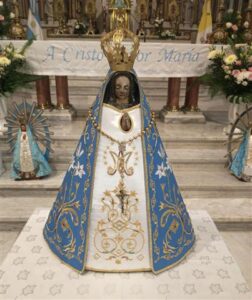 Each year, worshippers asked for the protection of the Patron Saint of the nation, Buenos Aires province, the Federal Police and the railroad, which has become an identity symbol and an important part of local history.

Under the slogan “You remained with us forever,” pilgrims left from Descanso El Peregrino, in the Buenos Aires area of La Reja, and many went to the saint’s mantle changing ceremony held each May 7th.

On the 8th, dedicated to the virgin, they joined a procession from Plaza de Colón until the sanctuary to attend mass in her honor.

History tells that in 1630 Portuguese landlord, Antonio Farías de Sá, who lived in Córdoba del Tucumán, asked a friend to send from Brazil an image of Virgin Mary for a chapel he was building in the current province of Santiago del Estero.

Two clay figures arrived from the South American giant on Captain Andrea Juan’s ship: one of the Immaculate Conception and another virgin with Jesus sleeping in her arms.

The boxes were being taken to their destiny when, on the Luján River Banks, the wagon which carried the first image stopped and it was impossible to move it. Then, neighbors took her to the nearby Rosendo family farm and there they built an altar. Slave Manuel, responsible for her care, was always with the Virgin.

It later became the Patron Saint of the former Viceroyalty of Río de la Plata and later the Republics of Argentina, Uruguay and Paraguay.

After changing its location several times, the so called “VirgenGaucha” is today revered at the Basilica of Our Lady of Luján, where it was placed around 1904. The stunningly beautiful building is considered Argentina’s national sanctuary and a local architectural jewel.