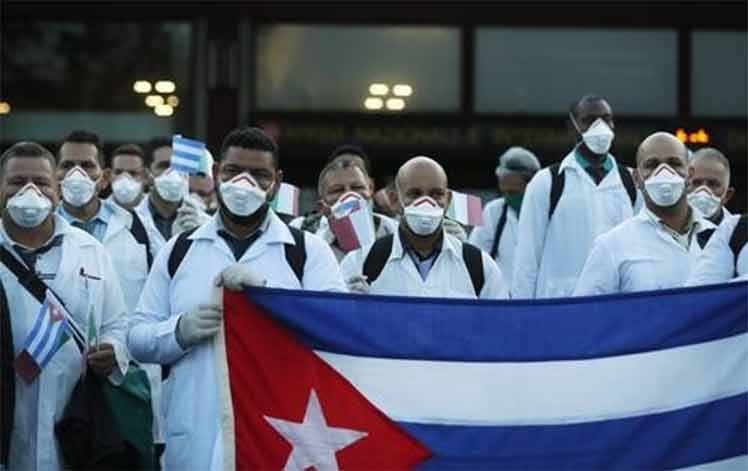 The article recalled that, on Monday, President Andres Manuel Lopez Obrador said that during his visit to Cuba a healthcare agreement was signed, which includes hiring more than 500 doctors from Cuba to face the deficit in our country, particularly in the most vulnerable areas.

He also announced that Mexican general practitioners would be sent to Cuba to be trained in several specialties and that a Cuban Covid-19 vaccine would be imported for use in children.

The newspaper reported that the president said that Mexico has a deficit of general practitioners and specialists due to the neoliberal policies that left thousands of aspiring medical students out of public education.

He added that sometimes the problem in bringing health services to the population is not a lack of hospitals, but rather a lack of professionals willing to work in hospitals located in areas with high poverty rates.

In response, La Jornada explained that representatives of more than 30 colleges, associations and federations of medical specialists published a letter addressed to the president, in which they reject the intention to hire the Cuban doctors.

The reaction from the medical organizations, he added, has been taken up and magnified by politicians and the Mexican right-wing media, in a true exhibition of the hysteria against the Cuban Revolution that characterizes these groups.

In a shameful manner, animosity towards the Cuban regime has been put before the needs of millions of Mexicans who do not have access to healthcare services, either due to the lack of professionals or their refusal to work in the communities where their presence is required, the newspaper added.

It is enough to point out that, according to the Ministry of Health, our country has a deficit of 200,000 physicians (at least 123,000 in general medicine and 76,000 in specialties) to meet the urgency of reinforcing the public sector workforce.

Also, the number of Cuban doctors is too few to have any impact on the employment prospects of Mexican doctors, the newspaper wrote.

Furthermore, the extreme pettiness of those who reject the presence of Cuban professionals leads them to absurdities such as questioning the competencies of those who have been trained in a tradition whose quality and spirit of solidarity are internationally recognized.