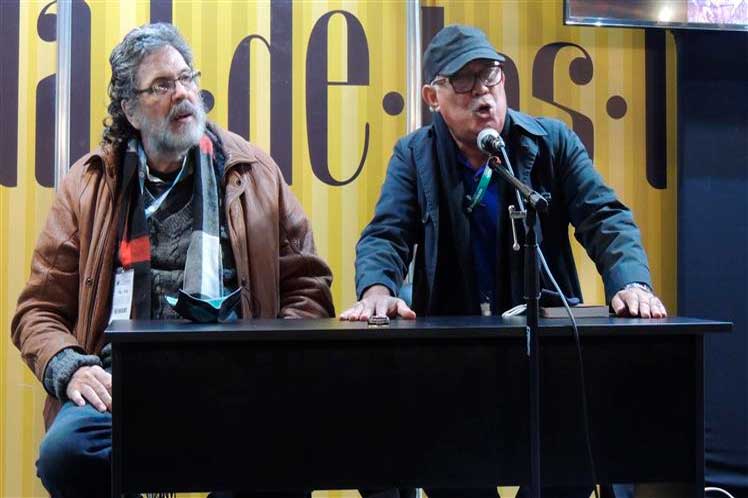 From April 28 to May 16, the Argentinian capital celebrated the festival of letters, after two years of waiting due to the Covid-19 pandemic.

Organized by the El Libro Foundation, the event was attended by 12,000 professionals, 610 exhibitors, 1,727 publishing houses and representatives from 16 countries, including Cuba, whose capital was named Guest of Honor. 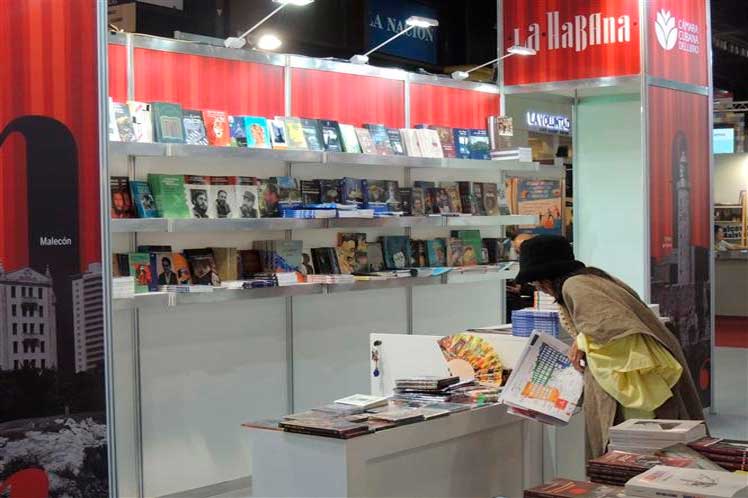 We are deeply pleased that the Cuban capital is the guest of honor in this edition. Great women and men were born there, including Jose Marti (1853-1895), a figure that unites our peoples through his preaching for human improvement, he said.

For her part, the coordinator of Objectives and Programs of the Provincial Government of Havana, Tatiana Viera, assured that her country offered Buenos Aires a sample of its customs, traditions and an interesting cultural proposal.

We bring, in the new authors, the respectful reincarnation of Roberto Fernandez Retamar and other classics such as Marti, Virgilio Piñera, Nicolas Guillen and Alejo Carpentier. With us comes all the history enriched with contemporary publications and the heart, still beating in the streets of Havana, of its faithful lover, Eusebio Leal, she said.

She also denounced an attempted attack by individuals financed from the United States who set up a presentation of works by dissident writers and tried to distort the image of Cuba. Those who are at the stand in Havana and receive them in the different halls and stages, traveled with limited resources provided by the people. They are their legitimate representatives. They are not financed by any foreign government nor do they use their undoubted creative freedom to call for the destruction of their homeland, Viera pointed out.

In them are reflected, unique and unrepeatable, my country and its capital. Everything else that is said is an offense, hatred, mercenarism and apostasy. Cuba lives in its literature and art, also for the world, she added.

Within the framework of the Fair, there were exchanges between the Cuban delegation and Bauer, representatives of social movements and trade unions, artists, intellectuals, poets and Cubans living in Argentina. During the meetings, photo exhibitions, theatrical shows, presentations and concerts, attendees expressed their willingness to strengthen the ties between both countries, their solidarity with Cuba, their condemnation of the US attacks and mourned the death of 46 people due to an explosion on May 6 at the Saratoga Hotel.

FOR EMANCIPATION AND JUSTICE

Today, as never before, we feel the siege of imperialism. Washington brutally tightened the blockade during the pandemic and is promoting a strong campaign to discredit the Cuban government, Alonso denounced.

They allocate many resources to hypercritical projects with the darkest and most perverse vision of Cuba. They offer supposed scholarships for creation and give money to media that distort reality and discredit our leaders. They put pressure on artists and buy them, he pointed out. 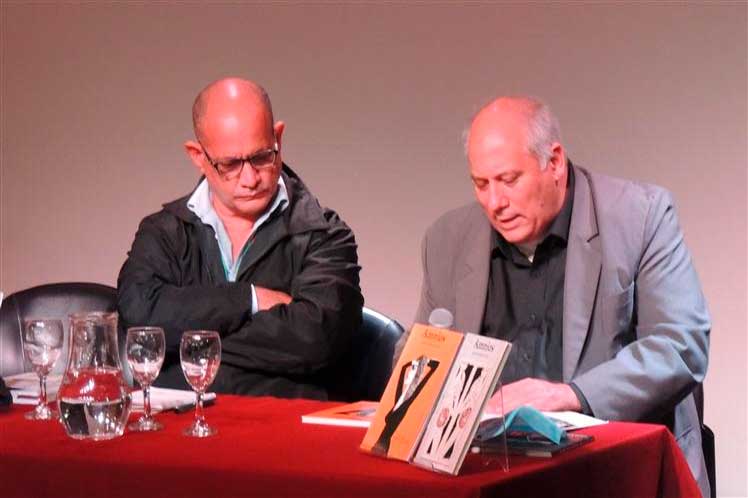 In view of this scenario, he considered that unity is key and asserted that the cultural battle is at the core of the struggle for emancipation and justice.

In statements to Prensa Latina, the minister assured that the Fair allowed exchanges with the public of a nation with a great literary tradition and, at the same time, it was a space to refute the lies spread about Cuba.

Historian Raul Capote denounced US actions to reverse the revolutionary process during the presentation of his book “Enemy,” in which he narrates his experience as a member of the Cuban State security bodies when he was recruited by the Central Intelligence Agency (CIA).

After almost a decade of undercover work, Capote revealed the details of CIA plans that allocated millions of dollars to political-ideological subversion, especially within key sectors such as the youth.

The researcher also warned about the continuity of these actions at present and the presence at the Buenos Aires Fair of Micaela Hierro, an Argentinian with ties with the far right in Latin America and hired by the CIA to carry out destabilizing operations against Cuba and Venezuela.

Hierro also participates in the organization of aggressive acts against the headquarters of the Cuban embassy in the capital.

On its side, the Argentinian representation of the Network in Defense of Humanity reiterated its solidarity with Cuba and condemned US attacks against that and other Latin American nations.

They want us to be their backyard and try to put an end to alternative and independent projects. They want to put their colonizing claws on our America. However, we have peoples who struggle, a region that withstands and a Cuba that gives us an example of brotherhood and dignity, the coordinator of the organization, Paula Klachko, said.

She also stressed that, despite US obstacles and attacks, Cuba continues to provide doctors instad of bombs to the rest of the world.

PROMOTING CULTURAL ACTIVITY AND TRUTH OF THE ISLAND

For her part, Juliana Marino, former ambassador of Argentina to Cuba, highlighted the ties of friendship between the two States and asserted that culture has always been at the center of the process initiated by leader Fidel Castro (1926-2016). 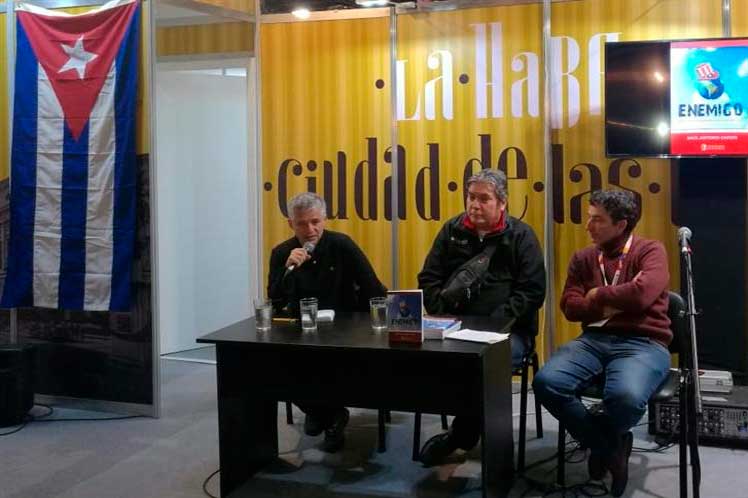 After 60 years without being able to defeat the Revolution, it is not strange that the United States is now trying to attack in the sphere of art and creation. It is the most important thing a country has, she said.

However, she claimed that the solidarity of the people and their culture are the pillar of their resistance.

In addition, it was a venue to denounce the economic, commercial and financial blockade imposed by the United States, its impact on art and the book industry, he said.

In this context, Prada highlighted the support of organizations and citizens from this South American country, which he considered a sign of “the extraordinary feelings of the Argentine people towards ours.”

The ambassador underscored the broad program deployed by the representation of the island, which included more than 170 activities at La Rural and other venues in Buenos Aires.

More than a hundred book presentations, poetry readings, lectures, discussions on different topics, concerts, exhibitions on Cuban theater, dance exhibitions, simultaneous chess games and activities to promote Cuba as a destination, among other initiatives, he said.

Our nation brought a very rich and diverse sample of general literature, poetry, history, politics, economics, religion and inclusion, among others. In addition, Argentinian publishers published 1,000 titles by authors from the island, so Cuba was present throughout the Fair, he added.

During the event, the first international edition of Fidel, a biography of the revolutionary leader written by writer Katiuska Blanco; new anthologies of Nicolás Guillén; the book Che, Masetti, Walsh. Prensa Latina, by María Seoane; and texts by renowned writers such as José Lezama Lima (1910-1976) and Miguel Barnet, among others. Cuba also promoted young people such as Claudia Damiani, 2018 Calendar Award and member of the Hermanos Saíz Association.

Near the end of the event, Havana handed over the Guest of Honor status to Santiago de Chile, the city that will be the center of the 47th edition of the Fair, slated from April 25 to May 15, 2023.