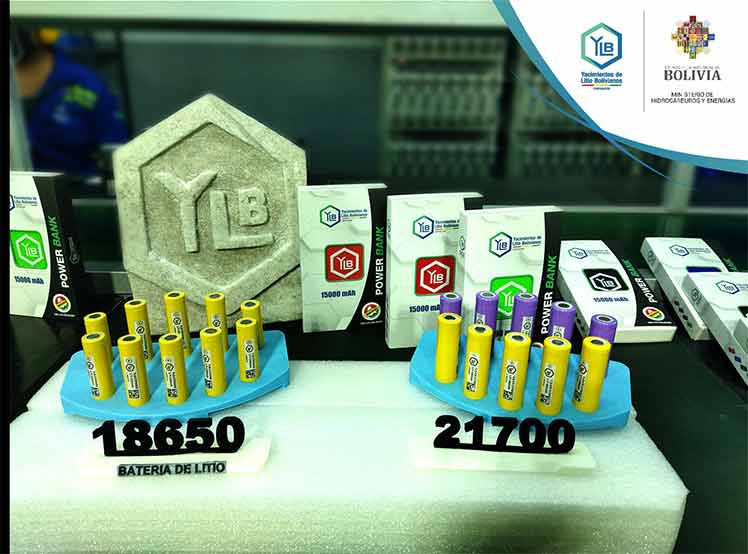 The strategic company works on the new format of cylindrical lithium batteries of 18650 and 21700 technologies, said the head of the area attached to the Hydrocarbons and Energies portfolio.

According to the engineer by profession, cathode materials are used in these undertakings that will be applied in “the production of battery packs for Laptops/Notebooks, electric bicycles, photovoltaic systems and electric vehicles”.

Arnez visited this Thursday the Pilot Battery Plant, located in the town of La Palca, department of Potosí, together with the executive president of the state corporation, Carlos Ramos, the National Executive Committee of Bolivian Workers’ Center and Departmental Workers’ Center.

Ramos reported in mid-April that Bolivian public and private companies such as Quantum Motors, Movi and Qipus use the batteries created by that company with good results, and now the corporation has a wide range of energy storage elements and the capacity to develop them.

According to him, the sale of lithium carbonate produced on a pilot scale in Uyuni, department of Potosí, contributed almost 19 million dollars in the first quarter of this year, and Bolivia is working to industrialize this sector.

Speaking to the ATB television network, he explained that the volume sold came from a facility that works under piloted conditions.

However, he showed optimism because in the future the highland country will have the Lithium Carbonate Industrial Plant in Uyuni, whose construction is 75 percent complete and should begin operations before 2023.

He informed that the productive capacity of this factory will be 15,000 tons per year, a figure that they want to reach in the shortest time possible due to the good price of the mineral, a resource that he described as “very valuable.”

Ramos said that the vision of the government of President Luis Arce is to industrialize lithium in the country, taking into account that the Plurinational State has the largest reserves of this metal on a planetary scale.

He stressed that the quantification of lithium is focused on Uyuni, but recalled that Bolivia has 16 salt flats, among which he mentioned those of Coipasa and Pastos Grandes, in Oruro and Potosí, respectively, areas that have not yet been explored and that must be quantified.

According to the corporation, Bolivia is currently facing the industrialization of lithium with the start-up of potassium chloride (agrofertilizer), lithium carbonate and battery plants, on a pilot and industrial scale, in the Uyuni salt flat.