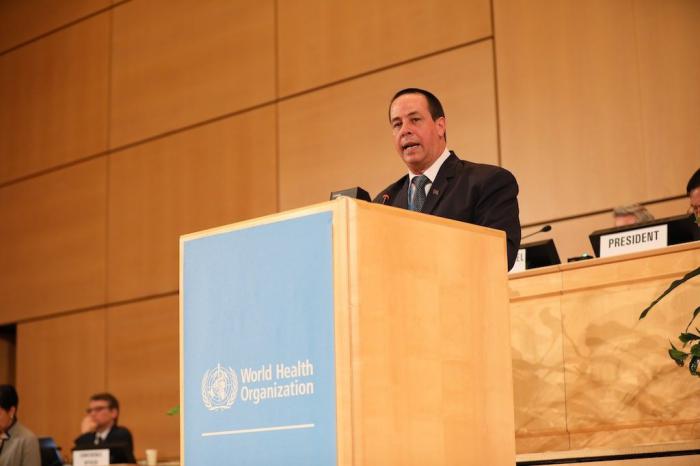 Through the social network Twitter, the Minister specified that Cuban doctors are considered part of the Qatari family, as his counterpart from that Arab nation, Hanan Mohamed Al Kuwari, assured him in a meeting.

In the context of the 75th World Health Assembly, Portal exchanged with the highest figure in Uruguay’s health portfolio, Daniel Salinas, on population aging, neurological diseases and universal health coverage.

We share experiences in confronting Covid-19 and the challenges of both States in this matter, stressed the Cuban senior official.

In addition, the Minister of Health of this Caribbean island spoke with the head of the sector in Armenia, Anahit Avanesyan, with whom he agreed on the many existing possibilities to strengthen cooperation ties.

The exchange made it possible to learn about the experiences of both nations in combating the current pandemic, Portal confirmed in a new text issued through his profile on the social network itself.

The Director General of the World Health Organization (WHO), Tedros Adhanom, previously thanked Cuba for its support to several territories during the most difficult times of the SARS-CoV-2 coronavirus, which causes Covid-19.

The director of the Pan American Health Organization, Carissa Etienne, described, for her part, as successful the fight of the largest of the Antilles against this contagious disease.

Portal reported on Tuesday that he met with his counterparts from India, Mansukh Mandaviya, from Colombia, Fernando Ruiz, and from Haiti, Alex Larsen, a country with which we have had a long history of medical collaboration, he stressed.

The Cuban head disclosed his messages in the context of the high-level segment of the 75th Assembly of the WHO, which began on the 22nd, will last until next Saturday and is the first face-to-face meeting at that level since the start of the COVID-19 pandemic. the Covid-19 in 2020.