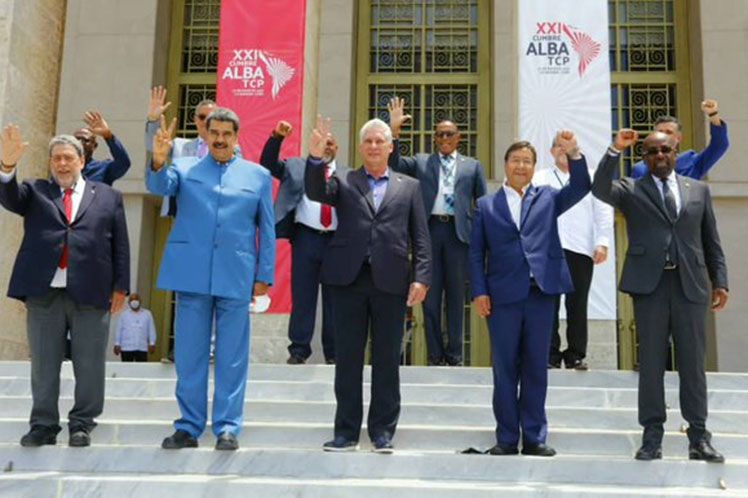 The XXI Summit of Heads of State and Government of the Bolivarian Alliance for the Peoples of Our America-People’s Trade Treaty (ALBA-TCP), held in this capital, condemned in its final declaration the discriminatory treatment towards those nations.

The text, titled “ALBA-TCP repudiates exclusions and discriminatory treatment at the so-called Summit of the Americas in Los Angeles,” was read by the executive secretary of the integration entity, Sacha Llorenti.

In 12 points, it ratifies the commitment to strengthening ALBA-TCP as an instrument of union of peoples, based on the principles of solidarity, social justice, cooperation and economic complementarity; with the integration led by the Community of Latin American and Caribbean States, and the Proclamation of Latin America and the Caribbean as a Zone of Peace.

The document supports the claims of the countries of Our America to materialize a change in hemispheric relations, based on the Charter of the United Nations and International Law, including the principles of sovereign equality, non-interference in internal affairs, or the use of force, and for the peaceful settlement of disputes and self-determination of peoples.

It reaffirms its support for multilateralism as a means to face complex global challenges through collective action, and denounces the claims of imperialist domination over the peoples of Latin America and the Caribbean, to keep the region divided according to its hegemonic interests.

They also reject the arbitrary, ideological and politically motivated exclusion of several countries from the so-called Summit of the Americas, which will take place in June in Los Angeles, United States.

In this regard, he described this unilateral decision as a serious historical setback in hemispheric relations that offends the Latin American and Caribbean peoples.

The declaration supports the right of all countries to participate in said event under equal conditions, and emphasizes that the host of the meeting in Los Angeles has no right to impose exclusions or conditions that violate its sovereignty and independence.

The document also denounces the discriminatory treatment of the United States against representatives of civil society on the continent and emphasizes that these types of exclusive meetings do not contribute to the solution of any of the urgent challenges of integration or regional and global threats.

It also highlights the courageous position of governments, social actors, organizations and peoples who have rejected, in various ways, the exclusions from the Los Angeles meeting.

The declaration rejects the imposition of unilateral coercive measures against Venezuela and Nicaragua, and the economic, commercial and financial blockade against Cuba, in violation of the principles of the Charter of the United Nations and International Law.

It also vindicates the national dignity of the peoples, based on the ideology of the founding fathers of Latin America and the Caribbean, and supports genuine efforts to promote respectful dialogue and peaceful coexistence among all the countries of the Americas, without exception, to find solutions to the great hemispheric problems.