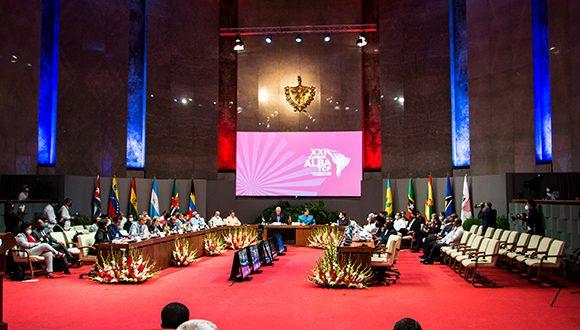 Havana, May 28 (Prensa Latina) The Heads of State and Government of ALBA-TCP expressed rejection of the intentions of the United States to establish their domination over the peoples of Latin America and the Caribbean to keep the region divided according to their hegemonic interests.
Share on facebook
Share on twitter
Share on whatsapp
Share on telegram
Share on email

The member countries of the Bolivarian Alliance for the Peoples of Our America-People’s Trade Treaty (ALBA-TCP) ratified in the final Declaration of the 21st Summit the commitment to strengthen the group as an instrument of union of peoples, on the basis of the principles of solidarity, social justice, cooperation and economic complementarity.

Cuban President Miguel Diaz-Canel emphasized in the opening speech the need to unite wills to build consensus and advance regional integration, not as a mere slogan but out of historical necessity. “United, no one will be able to silence us, just as they have not been able to break the collaboration and solidarity that allows countries with fewer resources to face the tough tests of our time,” he said.

For the president of Venezuela, Nicolas Maduro, “ALBA is the path of union and liberation of the peoples of the Americas”, and considered that the struggle of Latin Americans to raise the banner of unity has been worthwhile.

The Minister of Health and Social Security of Granada, Nicholas Steele, expressed that the limitations of the pandemic have divided the peoples of the region. For this reason, “it is unacceptable at this historical moment to allow other forces to divide us as a people and a region.”

The Prime Minister of Dominica, Roosevelt Skerrit, pointed out how unacceptable it is that the United States decides who participates in the Summit of the Americas; while the president of Bolivia, Luis Arce, and the Prime Minister of Saint Vincent and the Grenadines, Ralph Gonsalves, were categorical when they stated that they would not attend the Summit, to take place in Los Angeles, United States.

The Heads of State and Government agreed to continue defending ALBA-TCP as a benchmark for promoting cooperation projects that contribute to a more independent and sovereign Latin America and Caribbean, focused on multilateralism and solidarity.