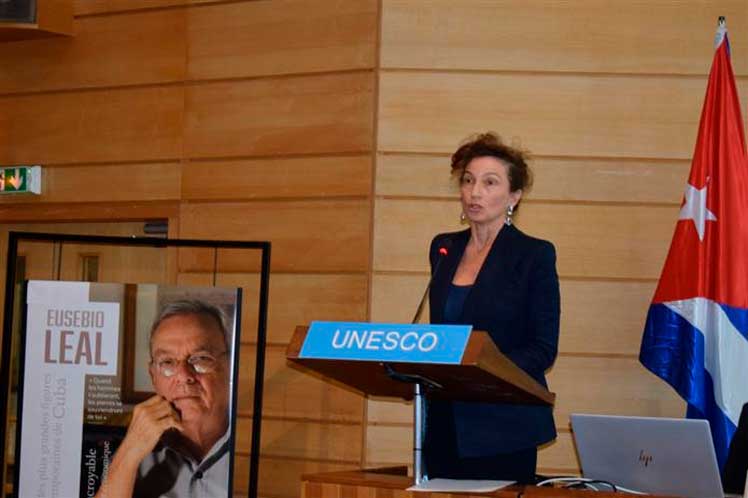 UNESCO Director General, Audrey Azoulay, said that she was moved when paying tribute to an exceptional man of action, a master who dreamed of a utopia, and who did great work to bring it to fruition, and a great friend of UNESCO´s.

Azoulay delivered her speech at the opening of a photo exhibition that showcases a synthesis of his life, his long career committed to heritage, cultural, social and economic programs mainly related to the renovation of Old Havana, for which he was responsible as director of the Office of the Historian of Havana.

Azoulay recalled her visit to Cuba in 2019, where, despite Leal´s serious illness ,he was her guide of a city which he showed with an encyclopedic knowledge, and whose architectural polyphony that he imagined, reflected and renovated should be useful to continue dreaming about it as he did, she said.

She added that few historians can feel as proud and be as committed to a city as Eusebio Leal with Havana, to which he devoted his entire life to protect it, and now we must expand and continue the task he carried out.

More than 3,000 buildings, 350 of which are more than three centuries old, which he studied, carried out a work with passion and precision, with a global and meticulous vision, and who knew how to invent a novel, original and efficient management model, where he integrated the recovery of heritage with the social, economic and cultural life of the population that inhabited it, she explained.

Regarding this goal of the Historian, she pointed out that it was not only about restoring and protecting its architecture, but also about placing the culture and all the intangible heritage of a city at its center, together with its economic and social dimension.