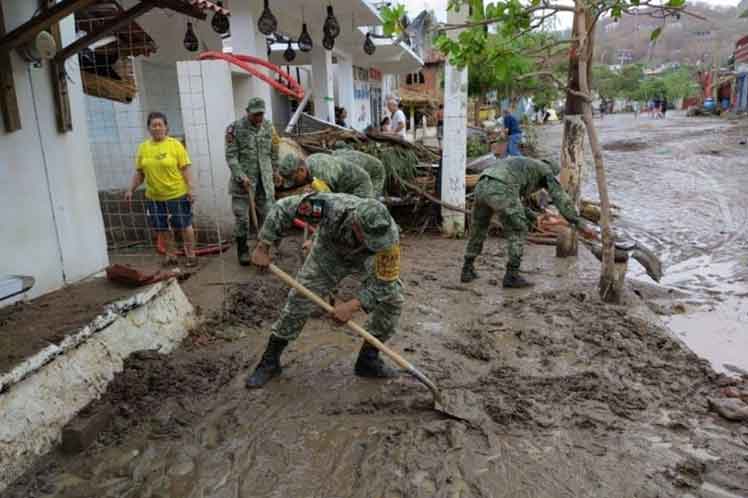 The President was in direct communication with the Governor of Oaxaca, Alejandro Murat Hinojosa, and General Luis Cresencio Sandoval, Secretary of Defense, who reported details of the current situation in the most affected areas. Murat Hinojosa said that the municipal presidents of several affected municipalities continue working to reestablish the state communication network and that the most relevant in infrastructure has to do with drinking water, despite the quantities that have already been distributed.

He mentioned that in the municipality of Pochutla, 80% of the drinking water distribution network has been affected, and in Coyula and Copalita, Huatulco, there are also very serious problems in the supply system of the precious liquid.

The governor added that bridges in the coastal area of the state are also affected, and a thorough work is being done with Civil Protection.

It was agreed with Public Welfare and the coordination of state delegations to begin with the housing census, the other great citizen demand, so that house by house it can be done and give an agile and quick response to the victims.

He emphasized that there is damage to crops in the area and to the tourist sector on the Oaxaca coast, and for this reason 1,200 food parcels will be distributed among the affected population in the next few hours.

The Secretary of Defense, Sandoval, highlighted in his report that they deployed the support of the agency in almost all the affected areas, and that shortly they will begin the distribution of food, although it will be in charge of the Secretariat of the Navy, while the Sedena will provide medical consultations.

Little progress is being made to rescue Mexican miners

Chinese diplomat thanks Cuba for its support against US interference

Little progress is being made to rescue Mexican miners

Chinese diplomat thanks Cuba for its support against US interference