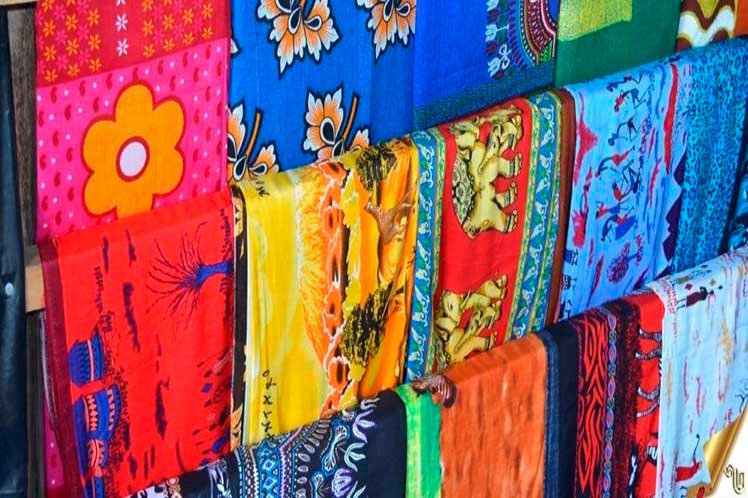 The kanga is Kenya’s most traditional textile attire, favorite among women in that east African country, where clothing is very important.

It is made of cotton, rayon, polyester or a mixture of fabrics, it is from one to 1.5 meters long, and has also become very popular in Tanzania, the Democratic Republic of Congo, Malawi, Burundi and Madagascar.

Its name comes from “ku-kanga” in Kiswahili, which means “to wrap” or “lock up”, symbolizing birds, especially the colored and eye-catching Guinea fowl.

It includes three sections: “pindo”, representing the border; “mji”, the middle, with different decorations, and “jina”, an inscription written on the fabric, usually in that language or in Lingala, in the case of Central Africa.

This outfit, which adapts to all different social contexts, has become an excellent ally for communication.

According to researchers, a quality kanga should have two basic characteristics: an eye-catching central engraving and an excellent Swahili proverb.

According to writer Yahya-Othman, some designs are used on special occasions, such as weddings and funerals. Wearing a red and black outfit in the bedroom could be a message that the woman sends to her husband that she has a “headache.”

The dress allows women to express feelings that socially they are not allowed to, especially in public, she notes.

In addition, she adds, it serves to start a conversation, taking into account a dialogue on the basis of the texts appearing in the garment, such as: “Usinambie!” (Don’t say!) or “Na kweli!” (Indeed!).

Besides being part of interpersonal relations, it has also been used during electoral, political and even public health campaigns for its effectiveness as a vehicle for social mobilization.

The African attire is multipurpose, since it allows things, ranging from carrying a baby on the back or using it as a cushion to carry a heavy burden on the head, as well as wrapping objects. They can be used as wall tapestries, blankets, curtains or seat covers.

Russia and African countries work on a second Russia-Africa summit

Russia and African countries work on a second Russia-Africa summit