Presidents of Cuba and United States made history in Panama 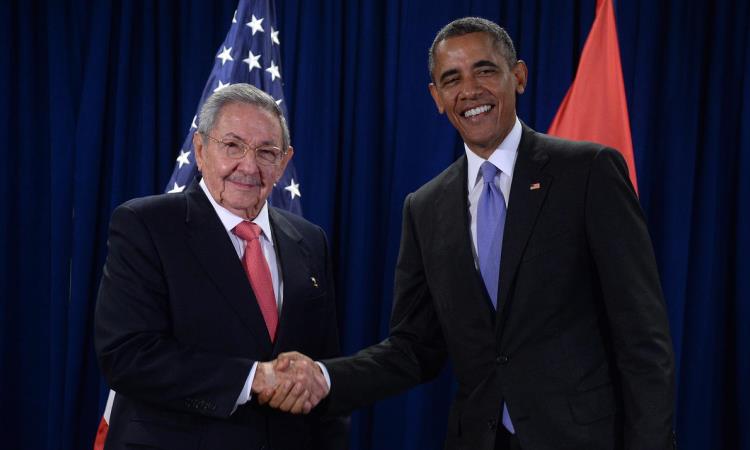 Presidents of Cuba and United States made history in Panama

Havana, Jun 6 (Prensa Latina) After more than 50 years of exclusion from the Organization of American States (OAS) and a 20-year absence from the Summits of the Americas, Cuba was invited in 2015 to participate in those meetings that are held every four years.

And it did so unconditionally and in the person of one of the main protagonists of the 1959 Revolution, Army General Raul Castro, who was the head of State of Cuba at that time.

The handshake and the first official meeting between the Cuban president and then US President Barack Obama in Panama on April 11, 2015, marked a milestone within the long discrimination suffered by the Caribbean country because of the economic, commercial and financial blockade imposed by the northern country since 1960.

That exchange between the two presidents defined the starting point of the effort, first, to restore the diplomatic relations (an idea that became a reality three months after the meeting in Panama), to later move towards the normalization of ties that had been non-existent for more than 50 years.

“It was high time I spoke here on behalf of Cuba” and “I am owed six summits from which we were excluded.” Raul Castro began in this way his country’s debut speech at the continental forum that for the first time brought together the 35 states of the continent at the same table.

Cuba’s inclusion in that meeting was the result of a generalized and energetic Latin American and Caribbean demand and the danger that ignoring that demand represented for the very existence of the Summits of the Americas.

“I thank all Latin America and Caribbean countries for their solidarity, which enabled Cuba to participate on an equal footing in this hemispheric forum,” Raul Castro said in the presence of the head of the White House, for whom he had words of recognition for his decision to move towards a new era in the relations with Cuba.

In Panama, the Cuban head of State said that Obama was not responsible for his country’s history of attacks and aggressions against Cuba.

But that rapprochement was cut short after President Donald Trump took office (2017-2021) and the implementation of hundreds of coercive measures that strongly tightened the blockade of more than six decades.

Upon speaking to the journalists that covered the first official meeting between the highest authorities of both countries, the US president thanked Raul Castro “for the spirit of openness shown towards us.”

For his part, Obama said that “after 50 years in which we had not changed policy, we had to try something new… we are beginning the way to the future and to leave behind the circumstances of the past.”

However, Raul Castro pointed out at that time that the blockade is implemented against Cuba in all its intensity, “it has caused damages and shortages to the people and it is the essential obstacle to the development of our economy. It violates International Law and its extraterritorial scope affects the interests of all States.”

Cuba was expelled from the OAS in 1962 and has repeatedly insisted that it neither intends nor wants to return to that US-controlled organization.

One thing is unquestionable: both presidents made the Panamanian summit historic.