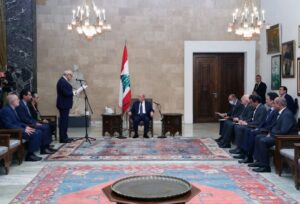 According to the Presidential Office, the Lebanese President emphasized that it is out of the question to renounce the country’s rights and this will be expressed to the US mediator Amos Hochstein, who will arrive this day in Beirut to resume the talks.

Receiving a parliamentary delegation, Aoun stressed that the indirect negotiations with Israel were paralyzed after the rejection of the Lebanese proposal considering the line drawn by the Army Hydrographic Authority, known as Line 29.

The President of the Republic expressed hope that talks with diplomat Hochstein will move the negotiations forward and mentioned the pressures Lebanon faces to avoid investing in its water wealth.

Aoun indicated that he is at the forefront of the negotiations and after reaching an agreement, the Council of Ministers must approve it and refer it to Parliament according to the rules.

He reaffirmed Lebanon’s condemnation of Israel’s threats that it is acting in contravention of international laws and resolutions, “taking advantage of the silence of the international community”.

The group of parliamentarians included Melhem Khalaf, Ibrahim Mneimneh, Ramy Feng, Mark Daou, Waddah Sad ek, Yassin Yassin and Najat Aoun, who expressed their repudiation of the entry of the Greek platform in Israel’s service in the disputed Karish field.

Tension between the two countries escalated over the past eight days when a ship from the Energean Power production unit serving Israel arrived at the Karish gas field, located in the southern area between Lebanon and occupied Palestine.

Lebanon and Israel do not have diplomatic relations and since the 2006 conflict, UN forces have maintained peace on the common border in the south.

Regarding maritime boundaries, the two nations resumed talks in 2020, but the process was put on hold following a request by Lebanese officials to update the map used by the United Nations in the talks.

Israel raids and shuts down offices of Palestinian civil institutions

Another Arab man killed in Israel, totaling 67 since early 2022

Israel raids and shuts down offices of Palestinian civil institutions

Another Arab man killed in Israel, totaling 67 since early 2022