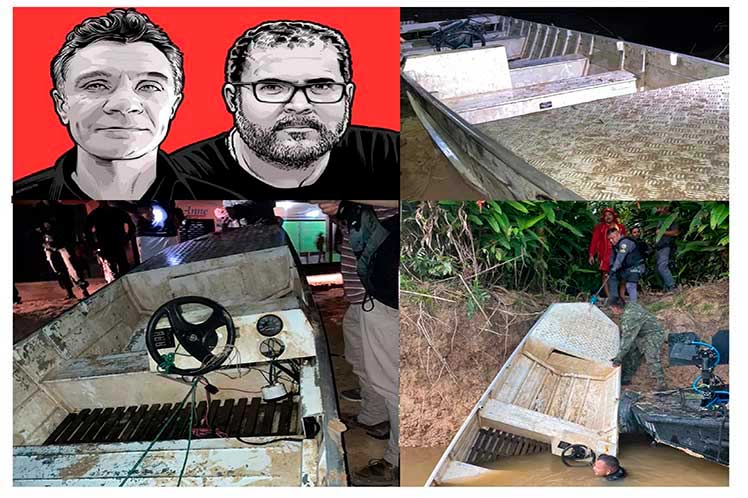 According to the Federal Police (PF), the boat was located at a depth of about 20 meters, submerged upside down with six sandbags to make it difficult to float.

During the five-hour operation, in addition to the boat’s hull, a Yamaha engine and four drums belonging to a collaborator of The Guardian newspaper were found, three on dry land and one submerged.

The PF reported that the boat will be subjected in the next few days to the necessary expert examinations to try to understand how the murder occurred.

Phillips and Aráujo were last seen on June 5 in the Amazonian community of Sao Rafael, within the indigenous lands of the Javari Valley, from where they left for Atalaia do Norte, although they did not reach their destination.

The remains of the 57-year-old reporter were found in an area indicated by the arrested fisherman Amarildo da Costa Oliveira, known as Pelado, who confessed to having buried the bodies near Atalaia do Norte, in a remote forest on the banks of the Itacoaí.

The PF also reported this Sunday that, in addition to the three arrested, five other suspects were identified as being involved in covering up the victims’ remains.

In a statement, the experts said that the techniques made it possible to establish that the indigenous man was shot in the head and thorax, and the communicator in the chest.

The tragedy caused indignation in the world and triggered criticism against the government of the ultra-right-wing president Jair Bolsonaro, accused of stimulating invasions of native patrimonies and threatening the preservation of the Amazon by favoring its economic exploitation.

Da Silva to participate in convention of Brazilian Socialist Party

Da Silva to participate in convention of Brazilian Socialist Party