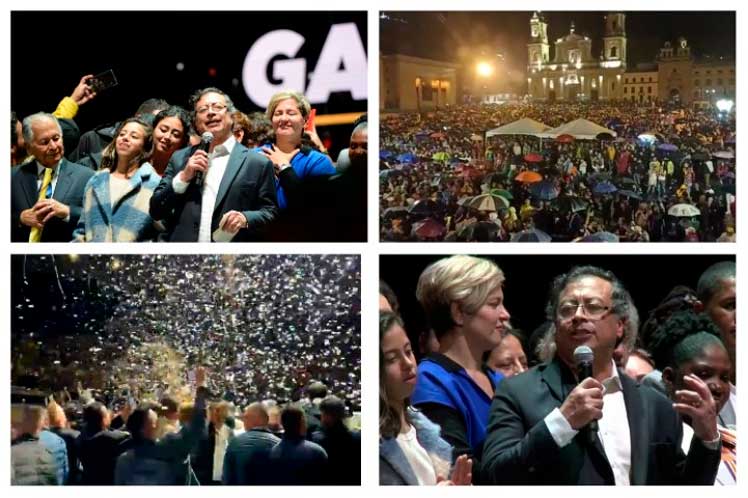 Bogotá, Jun 20 (Prensa Latina) Colombia´s elected president, Gustavo Petro, assured that change, hope, love and the major effort to win the elections would not have a purpose in this country without peace. He added that his government´s main objective will be peace, which means that the 10 million voters of his rival in this election, Rodolfo Hernández, are welcome in his governmnet, even the former candidate himself can talk with the new authorities whenever he wants.
Share on facebook
Share on twitter
Share on whatsapp
Share on telegram
Share on email

In his speech at the Movistar Arena in this capital, before thousands of people, Petro recalled that today the political atmosphere that accompanies the Colombian people in this century of hatred, of confrontations, literally to death, of persecutions, of isolation, cannot continue.

He expressed that there will undeoubtedly be opposition and maybe fierce and tenacious, and maybe we wil not understand it many times, but from this government that is beginning there wil never be political persecution nor legal persecution, there will only be repsect and dialogue.

“This is how we will be able to build what a few days ago we called the Great National Agreement and which has already begun to be built among 11 million Colombians (his voters), but it has to be among 50 million, it has to be with the whole society”, Petro stated.

He explained that the Great Agreement must begin to be built from the binding regional dialogue, which means that what is decided regionally to end violent conflicts, to build regional prosperity becomes a norm, becomes mandatory and is complied with.

These will be regional dialogues that allow to look at the conflict in its historical specificity and take into account all the diversity, he added.

According to data from the National Registrar’s Office, the Historical Pact, composed by Petro and Francia Márquez, obtained 11,281,013 votes in Sunday’s ballot, for a 50,44%.