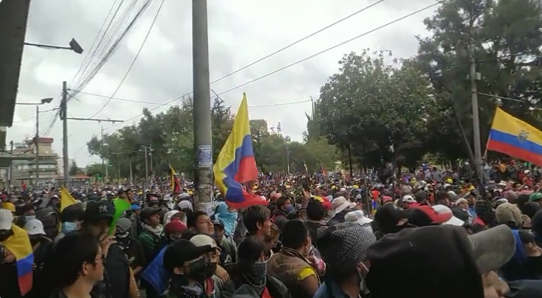 The National Assembly of the Peoples (ANP), made up of trade unions, peasants, associations of agricultural producers and other groups, specified that the Civic, Agrarian and Popular Strike will be accompanied by mobilizations, without ruling out blockades of streets and highways.

The protest raises a platform of political and social demands, among which stand out that of a new constitution with gender parity, multinational and ecological, as well as the closure of Parliament under right-wing control, whose unpopularity is reflected in a disapproval greater than 80 percent in various polls.

The ANP also supports the execution of the 2nd Agrarian Reform, announced by the Government, to face the food crisis; the dissolution of monopolies and oligopolies and a labor reform that eliminates the so-called flexibility or reduction of workers’ rights.

Other demands point to a new policy against corruption and citizen insecurity, as well as universal, free and quality health and education.

For his part, the president of the National Union of Heavy Cargo Carriers (UNT), Javier Marchese, demanded that the Government solve the problem of the rise, which he said was excessive in the price of gasoline and pointed out that in Peru it is the most expensive region of.

The strike, he assured, will continue until the Executive meets the demand and could last for at least two weeks in which, according to what he said, there will be no supply of agricultural products to the cities.

The stoppage is not unanimous, since the truckers’ union of the southern region of Arequipa agreed to give the government a truce until July 18, when the strike will begin if the problem is not resolved.

The president of the National Association of Land Freight Transport (Anatec), Bruno Aberasturi, confirmed in turn that he will join the UNT strike, while the Interprovincial Passenger Transport Association maintains a dialogue with the Government.

Last April, a carrier strike caused shortages in the cities and recorded violent incidents in which there were eight deaths, a figure that includes several that occurred in accidents during the protest, raised under the promise of attention to the claims.

According to the government Secretariat for Social Management and Dialogue, as of June 20 there were 129 social conflicts in Peru, more than half in the mining sector.