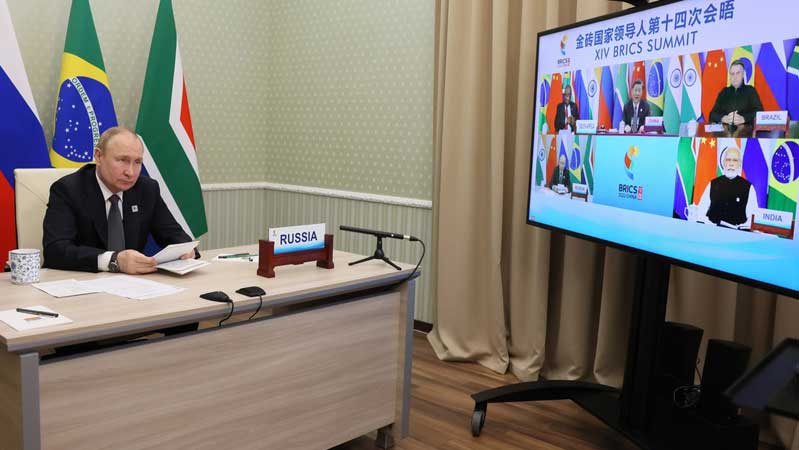 Moscow, Jun 24 (Prensa Latina) Russian President Vladimir Putin said that there are real opportunities to build practical trade cooperation between the BRICS and other states participating in Friday's summit via videoconference.

The summit was attended by leaders of the member nations of the group (Brazil, Russia, China, India and South Africa), as well as heads of State and government from Algeria, Egypt, Indonesia, Iran, Kazakhstan, Cambodia, Malaysia, Senegal, Thailand, Uzbekistan, Fiji and Ethiopia.

During his speech, the Russian president stressed that such expansion is also demanded with regional associations such as the Association of Southeast Asian Nations, the African Union, the Caribbean Community, the Cooperation Council for the Arab States of the Gulf and the Indian Ocean Rim Association for Regional Cooperation.

He stressed that, in turn, serious prospects for exchange between all these states are opening up in the context of linking the ongoing integration processes in the Eurasian Economic Union with China’s grand infrastructure and the Belt and Road trade project.

He said that, in general, they are convinced that this is is possible and necessary only collectively to address many serious issues on the global agenda, and their meeting on Friday is an example of constructive work in this track.

Putin drew attention to the importance of holding meetings in the BRICS Plus context with the participation of heads of State interested in building a mutually beneficial partnership, based on similar views on the pressing problems of global politics and economy, as well as on ways to solve them.

He considered it transcendental that the nations represented at the summit advocate the establishment of a truly democratic multipolar order in the world, based on the principles of equality, justice and mutual respect, so that world trade and finance are free of barriers and restrictions.