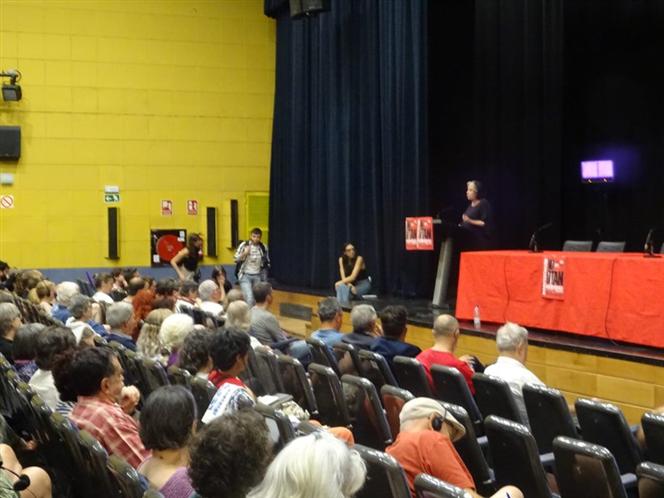 On the second day of debates in the auditorium “Marcelino Camacho” of Comisiones Obreras of Spain, various international organizations with delegates from several countries renewed their criticism of NATO on the threshold of their summit meeting, June 29 and 30 at the IFEMA-Madrid fairgrounds.

The counter-summit delegates complained about the Madrid City Council’s refusal to hold a protest march next Wednesday against the NATO event, arguing that the Prado Museum will host a dinner with participants on the same day.

In the panel entitled ‘New International Order’ today at the Summit for Peace, Enrique Santiago, parliamentary spokesman of IU and secretary general of the PCE; Jon Rodriguez Forrest, federal head of International Policy of IU; Manu Pineda, IU MEP in the group of The Left, intervene.

Madrid entered yesterday in a phase of alert that will increase to critical on Monday, and although the summit of the Atlantic Alliance as such will take place in the fairgrounds IFEMA-Madrid, in the famous museum will be held the dinner of honor to the participants.

More than 10,000 agents of the security forces have been designated to guarantee the protection of some 40 heads of State or government, together with another 5,000 people attending the meetings.

The General Commissariat of Police Information, the National Intelligence Center, police officers from the other member countries of the alliance, Interpol, Europol and NATO security are also part of the operation.

U.S. President Joe Biden will arrive on Tuesday at noon and, like the rest of the 40 heads of State or government who will be at the NATO Summit, will land at the military base of Torrejón de Ardoz, about 40 kilometers from Madrid.

Biden will be received by King Felipe VI and will then meet with the President of the Government, Pedro Sánchez.