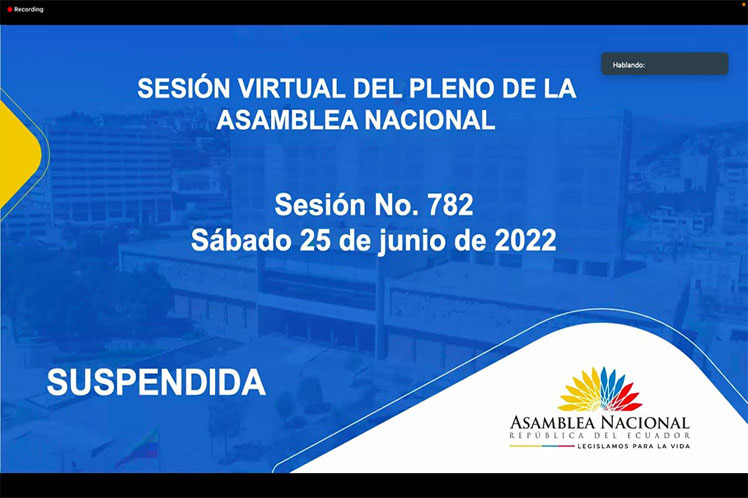 Saquicela made this decision after over seven hours of debate and 32 speeches by legislators, taking into account the request made by another 40 MPs to speak about the proposal promoted by the alliance Unión por la Esperanza (or Union for Hope, UNES).

They decided to resume the session in the afternoon, after a day when most speeches included messages for the families of the fatal victims and injured during the 13 days of the national strike convened by the Confederation of Indigenous Nationalities of Ecuador (CONAIE), supported by students, workers, women, farmers and others.

The president who did not participate in the session, a position criticized by some lawmakers, sent instead a written deposition.

“We cannot discredit the strike because there are comrades outside who will die for a just cause,” Congresswoman Johanna Moreira said and also proposed not to end the debate, but suspend it, pending the next decisions of the national government.

For his part, Congressman Pavel Muñoz said that no one can be happy in Ecuador due to what happened in 13 days of demonstrations, which showed a racist, classist society, which, instead of acknowledging just causes, stigmatized in some cases, something he described as horrible.

The social strike is based on a 10-point agenda proposed by CONAIE on employment generation, prohibition of illegal mining, attention to agriculture, funding for education and health, respect for collective rights, rejection of privatization and effective fight against insecurity.