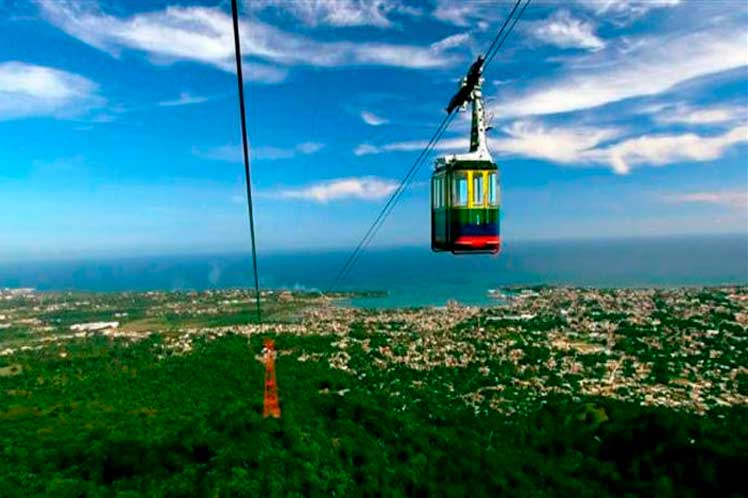 Santo Domingo, (Prensa Latina) The Dominican city of Puerto Plata, located in the namesake province, includes a large number of attractions that give luster to the town named “The Bride of the Atlantic”, but, without a doubt, its aerial cableway is its main highlight.
Share on facebook
Share on twitter
Share on whatsapp
Share on telegram
Share on email

Built to link the city with the Isabel de Torres Mountain, the work invites visitors to watch the country’s beautiful northern region from a height of some 800 meters, while it also has many entertainment areas and sites.

General manager Carlos Atahualpa Paulino is proud to show the dome on which the Cristo Redentor statue was erected, to which the Puerto Plata cable car takes you.

On the hill top there is a beautiful 15-hectare park, with trails that can be walked and the right atmosphere to rest, enjoy lunch with the family or a romantic date.

The tunnel and bridge of lovers is a site where people have the chance to take souvenir pictures.

There is also the cayenne tunnels, the belvederes, the Indians cave and a typical house where you can have a sip of good coffee brewed the old way.

There are also almost 600 species of plants and plenty of birds, such as the palm cigua, the guaraguao, the nightingale, carrao, pigeon and the hummingbirds, among others.

Our hosts explained that the aerial cable car project began under the supervision of the State Public Works Department in June, 1971, following orders by then president, Joaquin Balaguer.

It includes two cabins, united by two cables that make up a closed circuit and two stations; it opened on July 19, 1975 and has been used for nearly one million trips.

Its manager highlighted that last year the Colombian company Intecknoagain certified the system, after a failure occurred at the beginning of 2021, when 32 people trapped half way through the journey needed to be evacuated.

The event, which caused concern among Dominicans, was the first incident in the facility, but engineers made sure that existing security levels are in line with international standards and have all protocols activated to prevent accidents.