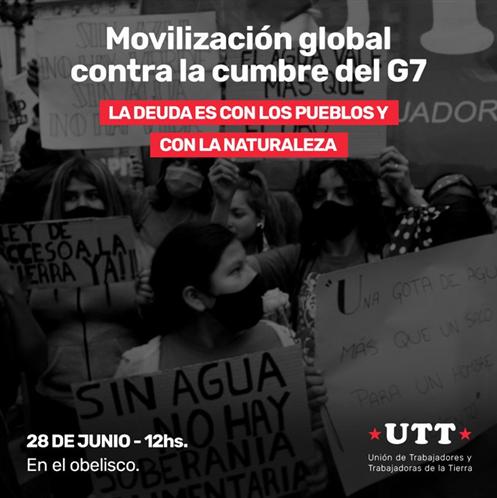 The G7 brings together the main powers of the world (Germany, France, Italy, United Kingdom, Canada, United States and Japan) and this day concludes its summit in the German region of Bavaria.

Under the slogan The debt is with the peoples and nature, Argentine groups will arrive at the Obelisk of this capital at around 12:00, local time, to join initiatives in about thirty countries with the purpose of demanding the cancellation of illegitimate financial commitments imposed on developing nations.

They will also demand respect for and protection of the environment.

Among the organizations that will participate are the Central de Trabajadores Autónoma, the Corriente Nacional Martín Fierro, the Unión de Trabajadores de la Tierra, the Progressive International (PI) and Proyecto Sur, among others.

The G7, the World Bank, the International Monetary Fund (IMF) and the Paris Club agenda is to submit us to processes of indebtedness impossible to pay off and to deepen the predatory model of our resources, affirmed the sociologist Juan Pablo Olsson, coordinator of the PI.

In this sense, a communiqué from the aforementioned entities denounced that “the global North intends to consolidate its colonial policy that prevents our countries from advancing in an agenda of ecological transition, sovereignty, social and climate justice that puts life above the accumulation and concentration of wealth”.

Argentina is an example of how the IMF pressures with unpayable debts to condition the economy, control resources and apply adjustment plans, the text indicates.