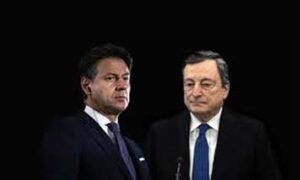 According to reports in the newspapers Corriere della Sera, La Repubblica and other influential publications, Conte described as a serious interference an alleged comment by Draghi to M5S founder Beppe Grillo, suggesting to remove him from his post.

During an interview, Domenico De Masi, a sociologist close to Grillo, alluded to such a request, which was immediately denied by the Italian president from Spain, where he was participating in a NATO summit, according to the media.

Draghi’s quick return, with the pretext of meeting with his Council of Ministers Thursday to address economic issues, was actually motivated, according to analysts, by his concern for the problems that threaten the coalition that supports his administration.

Some of the parties that support the Prime Minister’s team are the M5S, Forza Italia, the League, the Democratic Party (PD), Italia Viva, Article One and Together for the Future, something that shows a range of political positions, even opposing ones.

The leader of the League, Matteo Salvini, on Thursday spoke about the willingness of the left to blow up the government, considering unacceptable legislative projects of the PD and the M5S to legalize marijuana and naturalize children of immigrants who have studied in this country for five years.

Minister of Foreign Affairs Luigi Di Maio, who recently founded Together for the Future after leaving the M5S, said that both the latter movement and the League clearly threaten the continuity of Draghi’s government, with surrealistic debates and statements.