Delegation from Barbados welcomed at BioCubaFarma 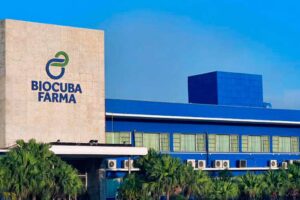 Delegation from Barbados welcomed at BioCubaFarma

At the meeting, both parties identified the interest in continuing to exchange and explore opportunities for cooperation and joint business in the biopharmaceutical sector, the Cuban entity disclosed through the social network Twitter.

The day before, BioCubaFarma signed a Memorandum of Understanding aimed at establishing a long-term alliance for the co-production of vaccines and other drugs with the government of Bayelsa, an important Nigerian state.

Despite the intensified economic blockade imposed by the United States, the largest of the Antilles captured global media attention when in July 2021 it announced Abdala, the first anti-Covid-19 immunizer in Latin America.

It also produced Soberana 02, Soberana Plus and is working on the candidates Soberana 01 and Mambisa, a nasal formula to boost immunity against disease.

Until now, Cuba leads the planet in the complete immunization rate applied per 100 inhabitants and due to the strategy followed, it has kept the SARS-CoV-2 virus under control in recent months.

Among the factors that explain the Cuban difference against the world in the fight against the Omicron variant, its vaccination with three doses to 90 percent of the inhabitants and a booster dose to more than 60 percent of them.

The island became the first country in the world to vaccinate its pediatric segment against Covid-19, which allowed children and adolescents to join classrooms with greater protection.

Its immunogens are safe and without serious adverse effects, according to successful clinical trials and administration carried out, even in a dozen nations.

BioCubaFarma, which brings together 31 companies on the island and others abroad, on the basis of associations, exports medicines and biopreparations to 51 states.

It has 80 production lines and advances in the development of novel medicines for diseases that constitute the main national and international health problems.