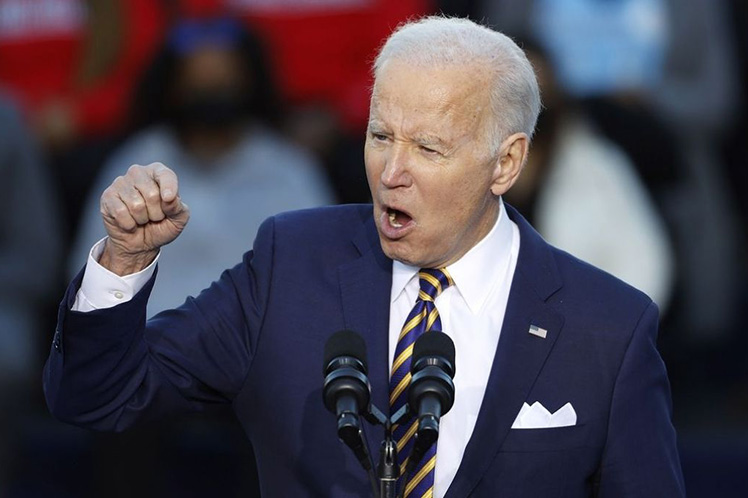 Havana, (Prensa Latina) This summer is complex for Joe Biden. Gas prices go up and his approval indexes as President of the United States go down.

A conservative majority at the Supreme Court of Justice undermined his government’s program by abolishing the legal right to abortion, as well as environmental protections aimed at stopping climate change.

Bad news for the Democrat when the November 8th mid-term elections are coming close and –as a historical trend- unpopular presidents seldom do well in such elections.

Support for the head of state is around 39 percent, the lowest since he took office on January 20, 2021, according to a recent poll conducted by The Associated Press-NORC Center for Public Affairs Research.

A downfall compared to the almost 59 percent of support a year before. Even now, only 14 percent of US people think that the country is going in the right direction.

The economy is usually the driving force for elections, and Republicans do their best to remind voters that Biden has been in office during a term in which the gallon of gasoline is five dollars and the prices of basic products have skyrocketed.

For the White House, inflation is a global problem which the ruler has little to be blamed for, but a year ago he claimed credit for the low cost of food, US media outlets say.

Prior to July 4, 2021, the executive mansion published on its Twitter account that the cost of a family barbecue had been reduced. “Hot dog -Biden’s economic plan- is working,” the message read at the time.

For 2022, the value of a combo that includes hamburgers, potato chips and ice-cream went up by 17 percent, the American Farm Bureau Federation concluded according to press quotes.

If Republicans take control of the House of Representatives (435 seats) in November, that would be the anticipated end of Biden’s rule, analysts say.

For their part, the president’s aides understand that not only plans are needed, but votes as well.