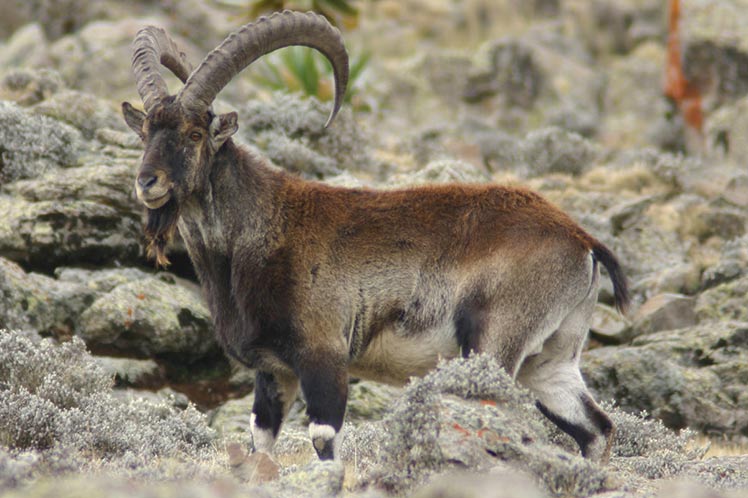 In this huge land of the so-called Horn of Africa “the five giants” can be seen; that designation is used to refer to African buffaloes, elephants, lions, leopards and black rhinos, described as the continent’s wildlife stars.

The walia stands out as a threatened mountain goat, endemic to the Simien Mountains (in the north), along with the Somali donkey, the Abyssinian wolf, the mountain niala, the Swayne buffalo and the gelada baboons.

Grasslands, cliffs and forests in the mountains are home to these horned goats, which are chestnut brown or slightly darker in color, with grayish noses, white bellies and legs, which eat lichens, grass, bushes and leaves.

They almost always live in small herds, but females are more solitary than males out of the mating season (from March to May). Their lifetime ranges from 11 to 15 years, although they live up to 20 years in the wild.

Although they are usually the victims of hyenas, walias (walyas in many texts) are not only threatened by these animals. Due to illegal hunting by humans along with habitat loss, the species runs the danger of disappearing.

Most of them are now in the Simien Mountains National Park. There, forest rangers have created conditions for their pregnancy period, which lasts from 150 to 165 days, after which they almost always bring to the world a single calf.

According to studies, in 1996 there were some 250 and less than 10 years later they increased to 500. There are currently thousands, but there are no accurate documented numbers, and human harassment and the deterioration of the sites where they live don’t stop.

Vulnerable beyond efforts, this goat’s future worries Ethiopia, where it is a national symbol, appears on a bill, names a transportation company, is a beer label and, mainly, identifies the men’s national soccer team, contrary to many people who wanted it to be called The Black Lions.