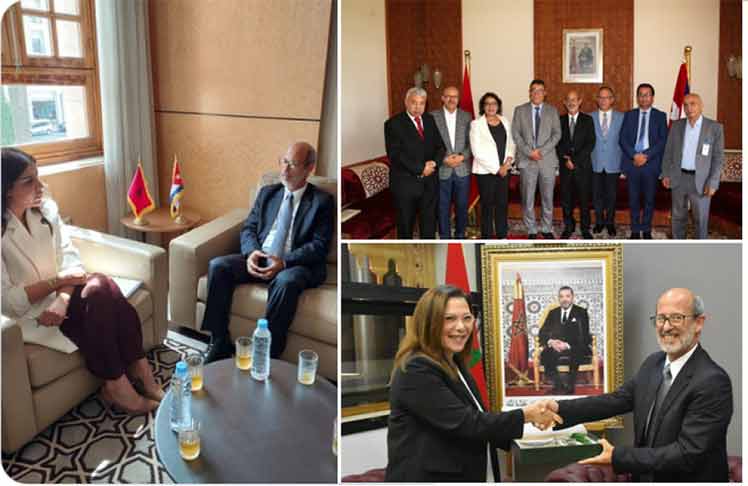 Rabat, Jul 16 (Prensa Latina) The vice president of the International Relations Commission of the Cuban parliament, Rolando Gonzalez, is having a busy agenda in Morocco to strengthen ties between the respective legislatures, diplomatic sources announced on Saturday.

The meetings included representatives of both Chambers of the Moroccan Parliament and a courtesy visit to the bilateral director general of the Foreign Ministry, Ambassador Fouad Yazourh.

The member the National People’s Power Assembly (Parliament) met with Nadia Bouaida, president of the Committee on Foreign Affairs, National Defense, Islamic Affairs and Moroccan Resident Abroad, of the Moroccan House of Representatives.

Likewise, he also met with Rachid Hammouni, president of the Progress and Socialism Group in the Moroccan House of Representatives, and Neila Mia Tazi, president of the Committee on Foreign Affairs, National Defense and Moroccan Residents Abroad of the House of Councilors.

In all cases, the Cuban parliamentarian was accompanied by Ambassador to Morocco Javier Domokos.

During the meetings, both parties made it clear the progress of the parliamentary agendas of each country, fundamentally with regard to the introduction and approval of laws that contribute to the modernization and better functioning of the State.

They also defended these visits to strengthen relations between the two countries in other fields, such as political, economic-commercial and cultural.

To this end, they insisted on the need to promote, at the legislative level, the creation of parliamentary Friendship Groups.

As part of his stay in Rabat, Gonzalez participated in the 10th session of the Global Parliament for Tolerance and Peace, which was attended by more than 80 legislators from around the world.

The Global Parliament for Tolerance and Peace, of which Cuba is a member, is one of the forums specialized in disseminating the values ​​of international coexistence.