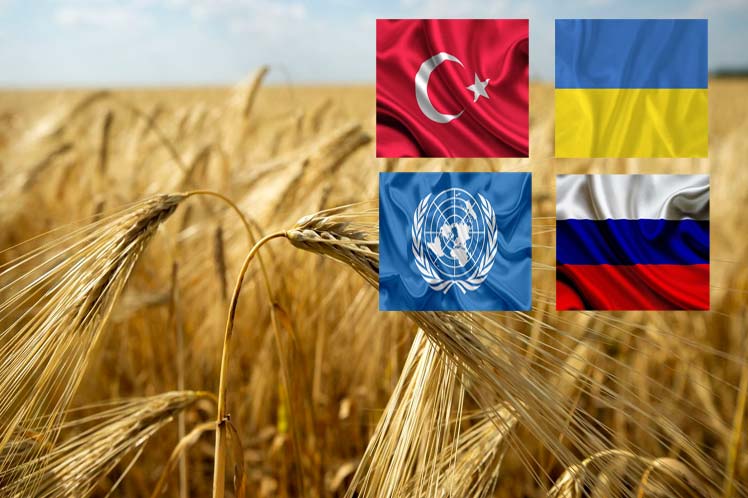 Ankara, Jul 22 (Prensa Latina) Official representatives from Russia, Turkey, Ukraine and the United Nations on Friday signed an agreement for the safe transit of grain through the Black Sea.

The agreement, inked at the presidential palace, stipulates, among other things, the participation of the United Nations in efforts to remove restrictions on the marketing of Russian wheat and fertilizers on the international market.

The agreement entails the creation of a safe corridor for the departure of ships from the Ukrainian ports of Odessa, Yuzhny and Chernomorsk.

Ukrainian vessels will leave their ports in the Black Sea along an agreed safety route, accompanied by Ukrainian tugboats, and minesweeping vessels may be used to verify the lack of danger in this corridor.

In addition, the operations will be supervised from a coordination center under the direction of the UN, to be set up in Istanbul, with the participation of the four signatory parties to the agreement.

The presence of combat technology in the transfer of these goods is prohibited. Neither airplanes, drones nor warships will be allowed approaching the route within a distance determined in advance by all parties.

Ships bound for Ukrainian ports will be subject to inspections by a joint group which provides for the participation of Russia, Turkey, Ukraine and the UN.

At the embarkation points, Ukrainian, Turkish and UN inspectors will monitor the vessels’ loading operations.

Possible incidents will be resolved by a joint quadripartite group during the 120 days stipulated in the agreement. This period may be extended if the parties so decide.