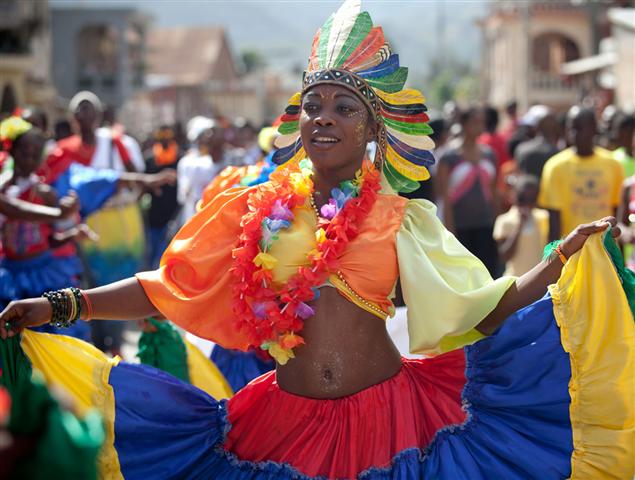 It is a celebration that mixes traditional voodoo ceremonies, music and dance, and took on other forms in nearby countries, such as the Dominican Republic and Cuba, where the descendants of the diaspora settled.

It traditionally takes place during Easter, starting on Ash Wednesday, and its strongest venues are Léogâne, south of the capital, and Artibonite, in the country’s northwestern section.

As a prelude, artists make the costumes and instruments and afterwards music bands travel through towns, first with a few dozen people, joined by hundreds down the road.

Researchers and ethnologists agree that the festivity is of Africanorigin and introduced in Haiti with slavery.

In the Caribbean nation it was a reward offered to the victims of the dreadful regime after each harvest.

Its most distinctive elements include the use of the vaskin, a musical instrument made of cylindrical bamboo tubes that produces a single note and can be either wind or percussion, because its players usually strike it rhythmically while blowing air through its mouthpiece.

Artists also use traditional trumpets, sticks and recycled metal scrapers, as well as drums, maracas, güiras or güiros and bells.

Other distinctive features include the voodoo ceremonies, in which spirits are called to protect musicians who travel late at night.

Something Haitians are proud of ishow the celebration served to forge their independence and plan revolutionary movements that led to their liberation in 1804.

Banned for several periods, even after independence, La Rara challenges time as a sign of resistance.

Timid resumption of activities in Haiti after protests

Timid resumption of activities in Haiti after protests