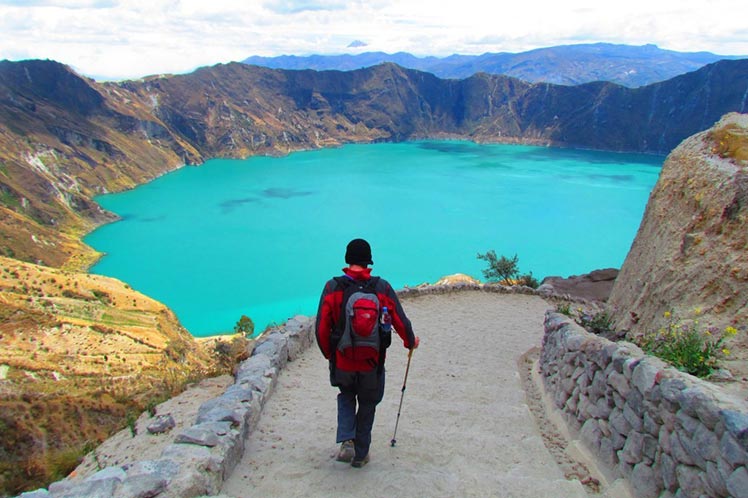 There are several giants located symmetrically and almost perfectly aligned in a 350-square-kilometer area, found in the nineteenth century by famous German naturalist, Alexander Von Humboldt.

The route’s main areas include volcanoes, such as the Chimborazo, whose summit represents the beginning of the closest distance to the sun, and the Cotopaxi, with its snow-capped summit. Their respective heights are 6 268 and 5 897 meters above sea level.

Also on this route is Cayambe, the third highest snow-capped mountain in Ecuador at 5790 meters and one of the few mountains of the kind crossed by the equator.

The Avenue includes the Antisana, the most extensive glacier in the South American nation, with peaks covered with snow most of the time due to rainfall from the Amazon basin.

Two brothers, the Illinizas, split summits of the same volcano, also appear on the tour, with a unique lush view which is typical of the country where the Middle of the World is located.

The Fire Gorge, the giant Tungurahua, with its fumes coming from its eruptive activity, is impressive and disturbing, especially at night, when it lights up the surroundings with fire rocks.

The inactive Altar with climate changes and a crater where Laguna Amarilla rests, and the Quilotoa, with turquoise blue waters that give life to a lake resulting from a volcanic eruption hundreds of years ago, are other magical sites.

Finally, you can watch the southernmost volcano, the Sangay, one of the most active and located in the Amazonian province of Morona Santiago, whose ash, lava and pyrotechnical material keep nearby populations and authorities on the alert.

Each of these giants is surrounded by local vegetation and animals, and are a uniquely beautiful, turning them into a must for nationals and foreigners who love adventure.

Turnat 2024 to be held in southeastern Cuba

Turnat 2024 to be held in southeastern Cuba