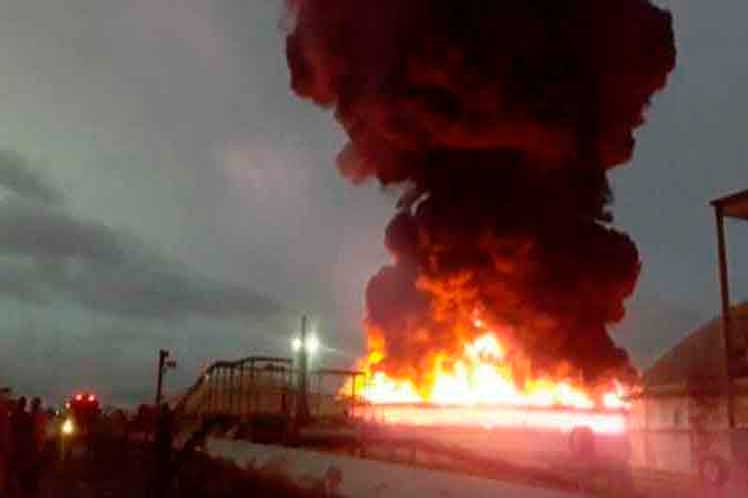 According to the source, messages from several nations express regret and support to the island in view of the tragedy that left so far more than 120 injured, one dead, while 17 people are missing.

Dominica’s Foreign Minister, Kenneth Darroux, conveyed his condolences to the Cuban people and government, while expressing his confidence in the island’s proven capacity to face difficulties and obstacles.

For his part, Venezuela’s sectoral vice-president for Economy, Tareck El Aissami, highlighted the aid sent from his country to this Caribbean nation on the instructions of President Nicolás Maduro.

This Saturday, a mission of Venezuelan firefighters and oil technicians arrived in Cuba to support the work of extinguishing the fire in Matanzas.

In addition to the mission of 35 experts in highly complex operations, Venezuela sent 20 tons of foam and chemical powders to contain the flames.

All our support and solidarity to revolutionary Cuba, the Minister for Petroleum of that South American nation stressed on Twitter.

Likewise, the Network of Intellectuals and Artists in Defense of Humanity-Uruguay Chapter, and the Committee of Solidarity with Cuba and the Peoples of the World of that country sent messages of solidarity to the Cuban people.

Mexico’s Movement of Solidarity with Cuba also expressed its support to the island in the face of the unfortunate fire.

Two aircraft arrived from that neighboring nation the day before with 62 military personnel and 16 technicians specialized in the area of oil and chemical supplies to confront the fire that started on Friday night due to an electrical discharge during a storm.