President of Peru ratifies refusal to resign despite pressure 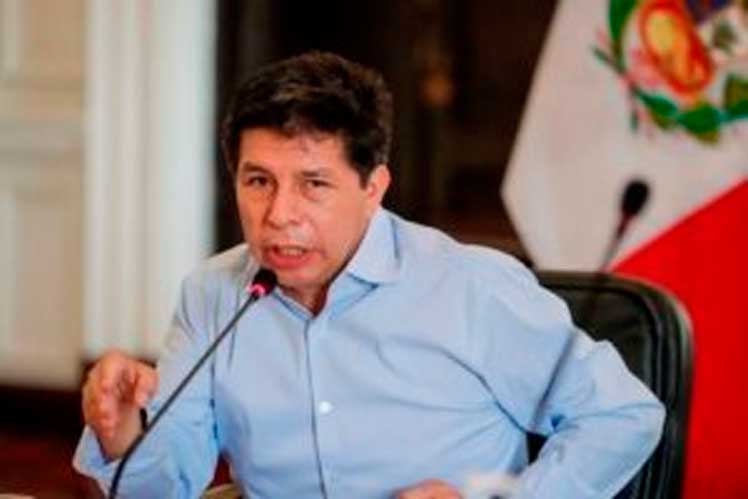 President of Peru ratifies refusal to resign despite pressure

“I am not going to separate myself from this people who have demanded justice for centuries,” he told hundreds of leaders of the Central Única Nacional de Rondas Campesinas, traditional community security organizations, who visited him at the Government Palace and gave him their support in front of to opposing attempts.

Alluding to the opposition Congress, he asserted that since the beginning of his government, a little over a year ago, he has asked for dialogue and consultation with the legislature, but it has another agenda, so from now on it will work “with the people and their organizations.”

Castillo stated that the patrols will have a place in his government and that he has a measure ready that he preferred to keep in reserve, in time to right the persecution and criminalization of the members of the patrols, many of them detained.

He denied the media and political accusations of kidnapping against the ronderos, whose power to detain lawbreakers is recognized by Peruvian law.

He assured that he will implement the announced agrarian reform – financial and technical support for small farmers – and he avoided referring to other demands brought by the patrolmen who arrived from different regions of the country.

Those claims were summed up by the rondero leader Marino Flores, president of the National Assembly of Peoples, which brings together social organizations and progressive political forces, and representative of the rondas in the block of agrarian organizations.

Flores condemned the attempts to remove Castillo and raised among the demands the closure of the opposition Congress (only possible if the legislature censures two ministerial cabinets), the convening of a constituent assembly to prepare a new Magna Carta to replace the current neoliberal one.

He also expressed the rejection of a law approved by Congress that authorizes the use of weapons supplied by companies or other sources, to the Self-Defense Groups created decades ago against the armed groups, which the Ministry of Defense and the Armed Forces also reject. .

He demanded the fulfillment of the electoral promises of measures of profound change and lashed out at the extreme right-wing leaders and questioned the Nation’s prosecutor, Patricia Benavides, for what he called cruelty towards Castillo, who has already opened five investigations for alleged corruption. .