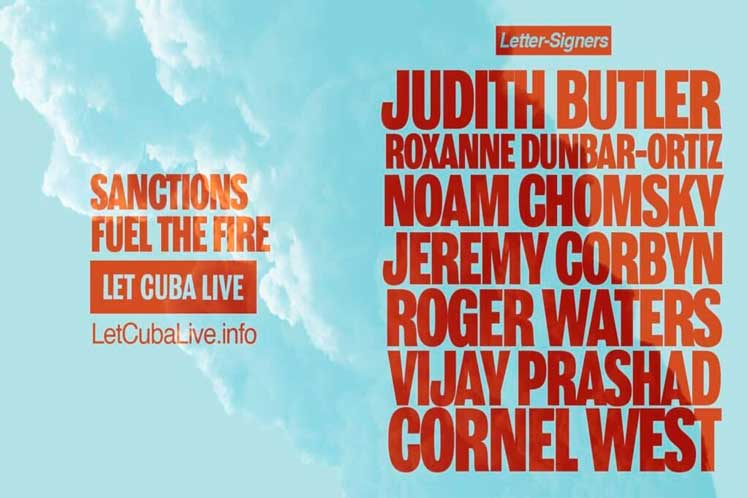 Washington, Aug 10 (Prensa Latina) Artists, intellectuals, politicians, scientists, activists and religious leaders today sent a letter to the President of the United States, Joe Biden, to demand the end of the blockade against Cuba in the midst of the devastating fire in fuel depots.
Share on facebook
Share on twitter
Share on whatsapp
Share on telegram
Share on email

“Sanctions feed the fire,” say the signatories of the letter, among whom are US intellectual Noam Chomsky, British politician Jeremy Corbyn, musician Roger Waters, philosopher Judith Butler, and the Afro-American Cornel West, known for his fight in favor of human rights.

In the text, personalities make an urgent public call to reject the cruel policies implemented by the Donald Trump administration (2017-2021) that affect the Cuban people.

The incident that occurred in the industrial zone of Matanzas, 100 kilometers from Havana, is the largest in the history of Cuba and occurs when the island is going through an energy crisis, which will worsen even more with this situation, the letter states.

Likewise, it specifies that the resources the government will be forced to dedicate to disaster response will also have a negative impact on the general well-being of Cubans in the midst of the more than 200 coercive measures imposed by Trump and still in force.

In the message addressed to Biden, they assure that, despite the words of condolence and the offer of technical advice, the United States government has done very little to help the Cuban people in their moment of greatest need.

Even though the US embassy in Havana clarified that the law authorizes US entities and organizations to provide aid and response to disasters, the Trump-era measures prevent urgently needed aid from reaching Cuba, they say.

It is excessive, especially during a tragic accident, to block remittances and the use of global financial institutions by Cuba, necessary to import food and medicine, refer the letter published on the Let Cuba Live platform.

Signing personalities ask Washington to lift all sanctions that prevent Cuba from receiving, directly or indirectly, medical, humanitarian, environmental or financial aid and stress that this includes removing Cuba from the List of State Sponsors of Terrorism.

So far, almost 30 personalities have signed the document in solidarity with the Caribbean nation, whose inhabitants have been suffering since Friday, August 5, the consequences of an electrical discharge that hit an oil deposit, which generated a fire of great proportions.

Combined forces of the Ministry of the Interior, the Revolutionary Armed Forces, the CubaPetróleo company and the Institute of Hydraulic Resources, together with Mexican and Venezuelan specialists, are working intensely to extinguish the fire.

According to the authorities, the Cuban government has not refused any help to fight the flames and they warn that “in the context of sincere offers, campaigns to instil hatred and discredit do not cease.”