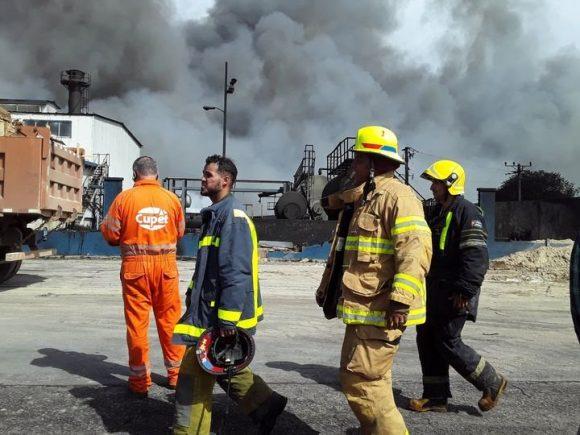 From the air, sea and land, specialized forces from Cuba, Mexico and Venezuela are using technical means of high precision to extinguish the small outbreaks of fire that still persist, mainly in two of the four tanks that collapsed due to the heat of the flames.

The temperature at the site is still high, but experts consider that extinguishing the fire, which may take a few more days given the magnitude of the event, is irreversible.

On Wednesday, Prime Minister Manuel Marrero wrote on Twitter that the Government has begun to assess the damages in order to plan the recovery.

The Supertanker Base is a strategic objective in the storage and distribution of fuels in the country due to its storage capacity of 400,000 liters, and the proximity to facilities such as the Antonio Guiteras thermoelectric plant in Matanzas and the Ernesto Guevara thermoelectric plant, located in Santa Cruz del Norte, in the western province of Mayabeque.

The team that will undertake the search for the missing persons is also ready, and it is consisted of forensic doctors and anthropologists, according to information provided by Public Health Minister José Ángel Portal.

As a result of the fire, more than 100 injured and one dead were reported, while a score of people are still being treated in hospitals.

Health and environmental authorities recommend the population to wear facemasks and protect themselves from the rain, although they warn that there is no report of an increase in respiratory diseases that could lead to think that the population is being affected by a contamination phenomenon.

On Friday, August 5, a lightning strike on tank 51 of the Matanzas Supertanker Base caused a huge fire that spread to the four-fuel storage of one of its batteries, which caused an unprecedented disaster in Cuba.