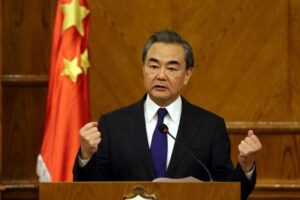 In an interview with the local press, the Foreign Minister pointed out that the situation in that area has not yet calmed down and Washington could use it to exacerbate it by sending troops.

However, he warned the White House that “the fight against more than 1,4 billion Chinese will not end well” and considered the recent visit to the island by the Speaker of the US House of Representatives, Nancy Pelosi, a deliberate political provocation.

On this point, he described Beijing’s response to the congresswoman’s trip as “justified, rational, necessary and appropriate”, indicating that it seeks to maintain regional peace and stability, as well as to defend the basic norms of international relations.

On the other hand, he mentioned that they are also keeping an eye on separatists in Taiwan, as they are taking advantage of the current tensions to collude with external forces and promote the path towards the fragmentation of the country. China responded to Pelosi’s visit with a combination of military, diplomatic, political and commercial measures that ratify the seriousness of its stance on the most sensitive issue of relations with Washington.

In addition, Beijing imposed sanctions on Pelosi and her family members, interrupted eight mechanisms of dialogue and cooperation with Washington, applied punitive measures against individuals, companies and organizations accused of promoting separatism, and suspended some imports and exports to the island.

The most recent in its reaction was a document in which it reaffirmed that the reunification of Taiwan is an unstoppable process, an indispensable step to consolidate national revitalization and also constitutes the historic mission of its Communist Party.

China takes steps to stabilize the yuan against the growing dollar

China takes steps to stabilize the yuan against the growing dollar