Forum in Angola on Agostinho Neto and Fidel Castro 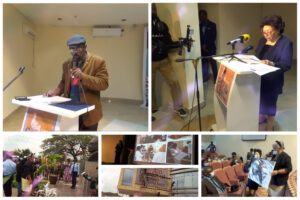 Forum in Angola on Agostinho Neto and Fidel Castro

From different areas of knowledge, the speakers addressed the legacy of Neto (September 17, 1922-September 10, 1979), and Fidel (August 13, 1926-November 25, 2016), and the role of both leaders in the establishment and development of links between Angola and Cuba.

They showed the world the advantages of friendship and solidarity when they agreed, at the beginning of the construction of the Angolan nation, the implementation of internationalist aid, estimated the widow Maria Eugénia Neto, who heads the Foundation dedicated to spreading the life of the patriot, writer and poet.

As Ambassador Esther Armenteros recalled, Neto has the glory of having fulfilled the dream of achieving a united homeland, from Cabinda to Cunene (from the north to the south), in the midst of immense adversity and danger.

The Cuban official distinguished the statesman’s ethics, his deep anti-imperialist thinking and the fraternal friendship that united him with Fidel, Army General Raúl Castro and the people of the largest of the Antilles.

For the historian and university professor Fernando Jaime, the Caribbean nation has opened its arms to the world and in particular to this continent since the times of the battles against colonialism, and “it was in Angola, Neto’s homeland, where Fidel and the Cuban people gave proof of unparalleled humanism”.

Over several decades, the cooperation allowed the incorporation of more than three thousand doctors and other health professionals trained on the island into the healthcare network, exemplified Dr. Yilian Jiménez.

In addition, a team of 300 professors, together with Angolan colleagues, inaugurated five medical schools in the provinces of Huila, Benguela, Huambo, Malange and Cabinda, from which around two thousand doctors graduated, the head of the medical mission abounded.

As of 2021, he reported, with the inauguration here of tertiary care specialized hospitals, teams of Cuban doctors with very high expertise in cardiovascular surgery, assisted fertilization and bone marrow transplantation, began to work on assistance and counseling programs. to expand services.

In the field of education, the balance of the collaboration is equally remarkable, stated the jurist Liliana Vilar, describing the main milestones during more than 45 years of exchange.

The António Agostinho Neto Cultural Center in the province of Luanda served as the venue for the meeting, where the Foundation received a work by the Cuban artist Yasiel Palomino, inspired by friendship.

Academics, historians, soldiers, government representatives and members of the diplomatic corps from friendly countries participated in the event, whose preamble was with an offering of flowers at the foot of a bust to Neto in the municipality of Icolo and Bengo, his hometown.