Science in Cuba, Fidel Castro and the Future 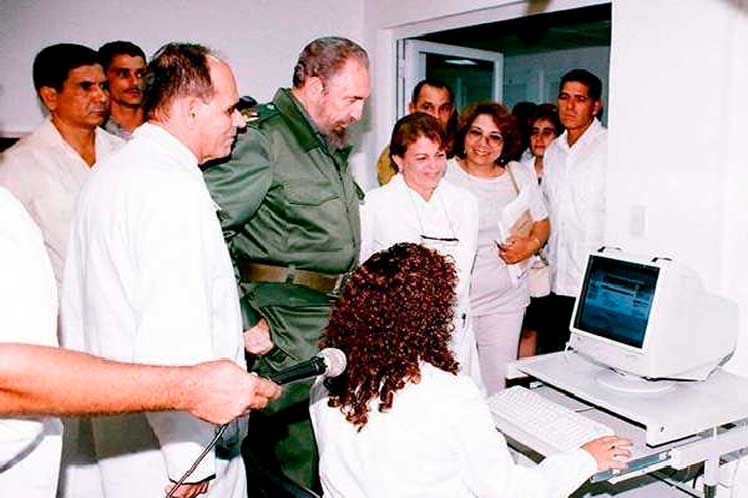 Science in Cuba, Fidel Castro and the Future

Fidel Castro was the driving force behind a megaproject that brings together several institutions that were part of the former Scientific Pole in Western Havana, from where countless achievements have been made.

“It is an honor in the middle of a special period to inaugurate this center, which is not a luxury, it is a promise of health and welfare for our people, it is a promise of income for our economy,” he said at the inauguration of the Center for Molecular Immunology of Cuba, on December 5, 1994.

At the same time, other similar institutions had already started up and now there are more than 30 entities that make up the BioCubaFarma Business Group.

Its main objective is to promote the development of biotechnology, the medical-pharmaceutical industry and advanced technologies to address health care and food problems, among others.

Since then, biopharmaceuticals and vaccines have been produced and exported to all five continents.

Just to mention a few, any Cuban child from birth is immunized against 13 diseases, including homegrown vaccines against eight of those diseases.

The antimeningococcal and recombinant hepatitis B vaccines, which have made an important social, economic and strategic contribution, are part of the vaccination schedule for children.

On the other hand, the Center for Genetic Engineering and Biotechnology (CIGB) is the creator of Heberprot-P, the only drug in the world to treat diabetic foot ulcers and which is currently being validated in several countries worldwide.

Also from the CIGB are Mambisa and Abdala, the latter being the first vaccine in Cuba and Latin America against Covid-19.

Another important center, founded in 1987, is the Immune-Assay Center, dedicated to the production of diagnostic kits for research on HIV/AIDS, hepatitis B and C, alpha-fetoprotein in pregnant women, the detection of hypothyroidism in newborns, and immunoglobulin E, among other parameters.

Its Ultra Micro Analytical Diagnostic System (SUMA) and the corresponding technological equipment, with 23 diagnostic kits applicable to 15 diseases, has achieved the detection of congenital malformations in babies, hemorrhagic dengue, as well as the early identification of cervical and prostate cancer.

Those first steps taken by Cuba in immunology and biotechnology under Fidel Castro’s watchful eye are the ones that have made it possible to have Covid-19 vaccines, analysts agree.