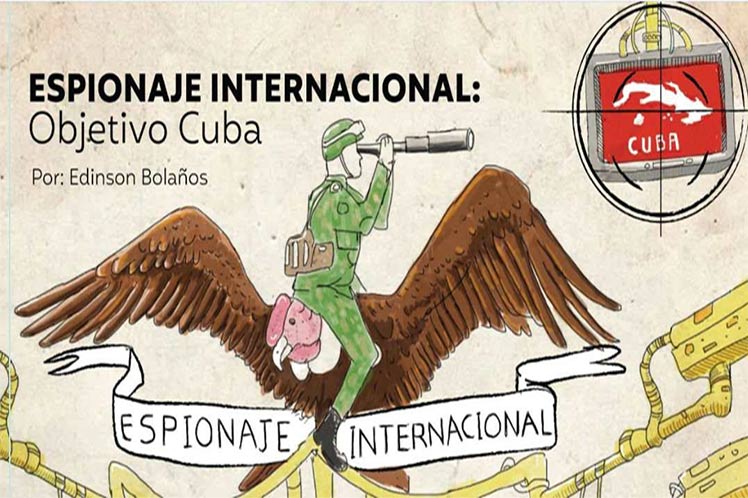 Under the title Espionaje Internacional: Objetivo Cuba (International Espionage, Target Cuba), the publication announced that it had access to thousands of classified documents of Colombian military intelligence agencies where it is evident how they spied on Cuban diplomats and officials, leftist political leaders, journalists and social leaders.

In statements to Prensa Latina, its director Edison Bolaño explained today that as a journalist he has always been interested in Colombia’s geopolitical issues and he was very curious about tensions in the last four years between Bogota authorities and Cuba.

“I began to ask around and obviously, through confidential sources, after many conversations, I managed to gain access to more than a thousand files that reflect a whole espionage apparatus against Cuba and its diplomatic corps based in Colombia,” he said.

According to the journal, information was adulterated in the computer of a guerrilla chief to blame Cuba for the violent protest in Colombia at the end of 2019, 2020 and 2021.

The investigation points out that the target “Charlie” was the name given to the espionage operation against the government of Cuba, including its diplomatic corps in Colombia, was carried out fundamentally during the government of Ivan Duque (2018-2022).

It details that little by little the Colombian spies, without a judicial order, carried out surveillance and monitoring of Cuban diplomats by infiltrating political meetings and commemorations of the Cuban Revolution.

This espionage was done by the military intelligence agency in conjunction with the National Intelligence Directorate, a dependency of the Presidency of the Republic of Colombia, he pointed out.

In some cases, they used sophisticated equipment to breach private communications of diplomatic officials, the investigation showed.

It warns that there are documents in English under the name “Secret/Rel To USA, Colombia” that “come from US intelligence agents”.

In these reports it is clear – says RAYA – that the US agents were also very interested in obtaining information about the Cuban diplomats in Colombia.

The truth is that the Colombian agents did not obtain proof that Cuba was indoctrinating, nor behind the social protests, nor that it was carrying out espionage operations.

Finally, RAYA recalled that “on January 11, 2021, before leaving the White House, former President Donald Trump, using the old policy of the internal enemy and the ‘evidence’ that Colombia had provided, again declared Cuba as one of the countries in the world that sponsor terrorism”.