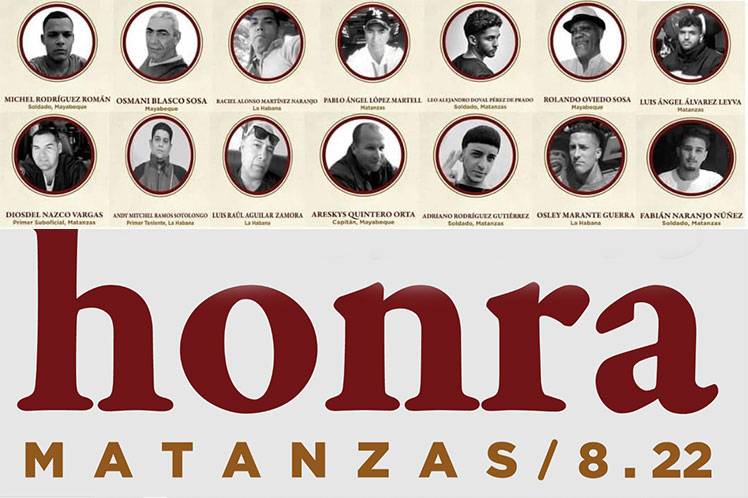 From 10:00 to 17:00, local time, the population will express their condolences and solidarity at the Enrique Estrada Firefighters Museum of Matanzas to those who died in the line of duty while fighting the flames.

In all, 16 firefighters died, two of them in hospital, but 14 were given as missing; their remains were later found but beyond possible identification

Among the 14 missing in the incident there were three from Matanzas Adriano Rodríguez, Fabian Naranjo and Leo Alejandro Doval, and one from Mayabeque, Michel Rodriguez; first non-commissioned officer from Matanzas Diosdel Nazco; captain from Mayabeque, Areskys Quintero, and first lieutenant from Havana Andy Mitchel Ramos.

President Miguel Diaz-Canel decreed two days of official mourning that started at 06:00 local time on Thursday, in tribute to the victims of the country’s worst catastrophe of its kind.

Doctor in Legal Medicine Jorge Gonzalez, who headed the team of specialists who undertook the delicate task finding the remains, explained in a press conference that even though they managed to find 14 groups of skeletal bones, it was impossible to make a full identification as they were so burnt out.

Absolute identification is that which makes it possible to define that it is a specific person and not another, he explained, which in the circumstances of the accident is impossible, since none of the three elements required by modern technology were available: fingerprints, dental studies or DNA samples.

The high temperatures to which the 754 bone fragments found were subjected to eliminated the possibility of extracting DNA for comparison, a criterion with which international experts contacted to address the situation agree, he added.