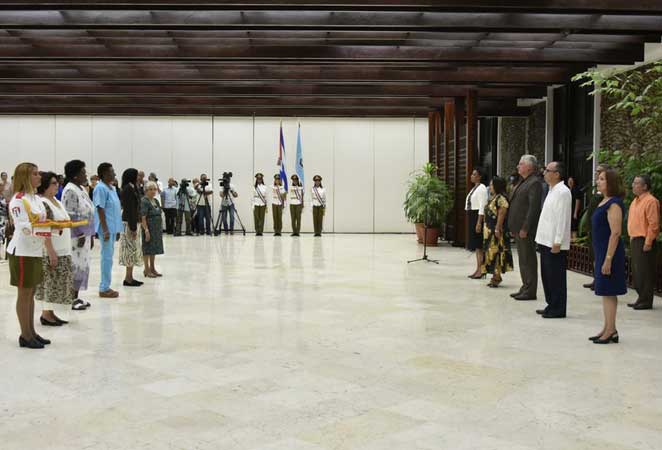 Havana, Aug 23 (Prensa Latina) President Miguel Díaz-Canel and other authorities congratulated the country's women on the occasion of the 62nd anniversary of the Federation of Cuban Women (FMC).

In his Twitter profile, the Cuban leader highlighted the impetus given by that organization to the advancement of Cuban women, under the guidance of Vilma Espín, its founder, and the historic leader of the Revolution, Fidel Castro.

Thank you for being masters of creative resistance, strength, inspiration and support, Díaz-Canel said.

Prime Minister Manuel Marrero also congratulated the federates on the anniversary, and recalled a phrase of Fidel Castro, who said that “the Revolution has, undoubtedly, in the female sector of our population, a very large support”.

For his part, Foreign Minister Bruno Rodriguez said on the social network that the drive, creative spirit, dedication, loyalty and commitment of women distinguish the process of transformations that the island has been promoting since 1959.

The vice president of the National Assembly of People’s Power (Parliament) and the Council of State, Ana Mari Machado, highlighted the daily heroism of women in their social, family and personal work, “without losing optimism, joy and desire to do for the Homeland”.

This Monday, President Miguel Diaz-Canel and other authorities of the island imposed the “Mariana Grajales” Order to five women, the “Ana Betancourt” Order to 20 and 10 others received the “23 de Agosto” distinction, granted by the National Secretariat of the FMC.

Such awards recognize relevant merits and contributions to the development of society and the defense of the nation, as well as an extraordinary attitude in work, defense and study.