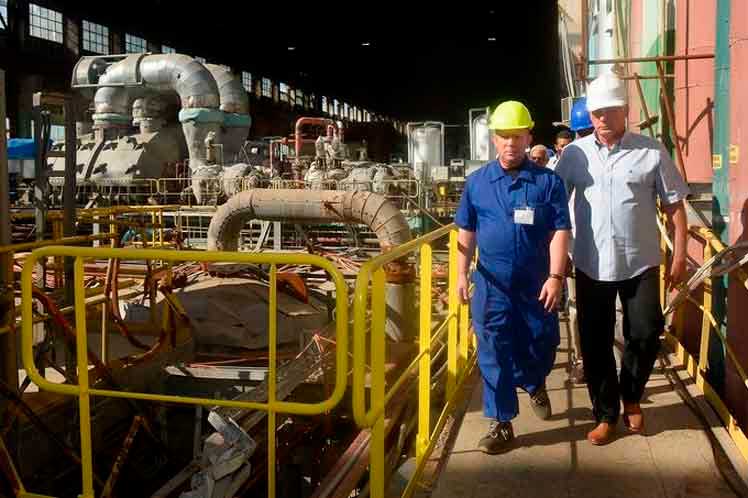 Havana, Aug 28 (Prensa Latina) Cuban President Miguel Díaz-Canel on Sunday praised the efforts being made by workers in the electricity sector, who are working tirelessly to recover damaged power generation units nationwide.

Diaz-Canel spoke about his visit on Saturday to the thermoelectric plants of Mariel, west of Havana, and Santa Cruz del Norte, east of the capital; and highlighted the efforts of those who work in these and other generating units in Cuba.

“Cuba will overcome the energy crisis generated, in the first instance, by the affectations caused by the US blockade,” the head of State said in another message on Twitter.

He added that they are working hard to minimize blackouts before the end of the year and stabilize the national power system by 2023.

On Saturday, Díaz-Canel commented to the press on the national strategy to address the generation deficit and power outages due to this cause.

In this regard, he pointed out that it pursues three objectives: first, to move away from blackouts in the shortest possible time; second, to develop during 2023 investments and maintenance that will stabilize the system, and third, to advance in the change of the energy matrix with the use of renewable sources.

The President explained that as a result of the first financing delivered months ago, parts and components for the maintenance of several generators and thermoelectric plants are already arriving in the country, which will allow the recovery of generation capacities.

He added that the Government recently allocated new financial resources to continue searching for solutions.

According to the plan, more than 270 megawatts of thermal generation should be recovered by December, while 180 megawatts should be incorporated in distributed generation.

To this will be added more than 450 megawatts due to new investments.